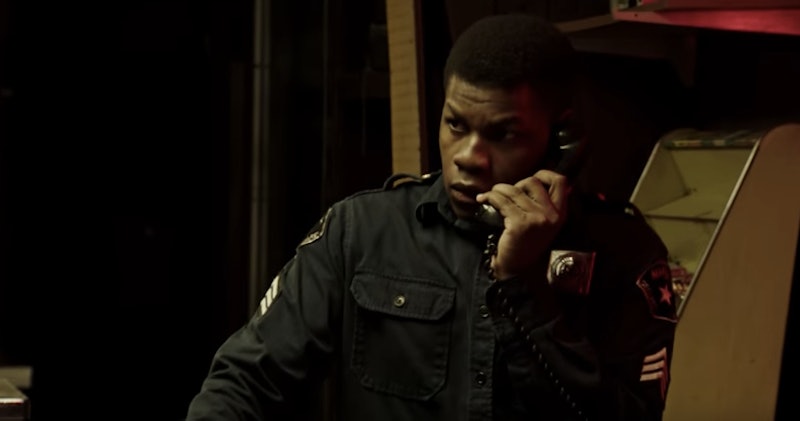 So, you just watched the trailer for the upcoming film Detroit, you're covered in head-to-toe goosebumps, and you can't wait until the film premieres on August 4 to find out more? I hear you, so let's talk — what were the Detroit riots that the upcoming Kathryn Bigelow-helmed and John Boyega-starring film centers around? These were real events that took place in Detroit, Michigan in the summer of 1967, but a lot more happened than a two-and-a-half minute trailer can adequately convey, and you might not remember some of it from you history books. (Which is, y'know, maybe why the film is being made in the first place.)

In a span of just five days in Summer 1967, from July 23-28, a disturbance near the intersection of 12th Street and Clairmount Avenue in Detroit escalated into a full-on riot that engulfed the entire city, according to the New York Times. As the Times claimed, "The long-simmering anger of black residents at an abusive, mostly white police force erupted." The catalyzing event was reportedly a police raid of an unlicensed drinking and gambling club. According to Mashable, officers encountered and detained a crowd of more than 80 people, all black. As a result, people reportedly began retaliating and things shifted toward violence.

From there, looting and vandalizing took place. As Mashable reported, there were so many people arrested that police had to create makeshift jails. Based on their stats, there were an estimated 10,000 rioters and 100,000 onlookers involved. According to TIME, in addition to looting and vandalism, rioters began to set fires across the city.

In response, Michigan Governor George Romney — yup, Mitt's dad — reportedly called in the Michigan Army National Guard, according to TIME. Additionally, then-President Lyndon B. Johnson sent in federal troops and tanks to attempt to quell the violence, according to Mashable. Although the troops helped bring things under control, it was at the cost of a tragic amount of human lives, not to mention the destruction of property; 43 people perished in the span of the 12th Street Riots, Mashable reported.

And the rest of the stats are no less jarring. Per Mashable, official accounts place the number of injuries at 1,189; arrests at 7,200; and claim that 2,000 buildings were destroyed for damages estimated at $40 to $45 million, which reportedly makes it one of the deadliest and most destructive riots in United States history. TIME deemed the incident "one of the bleakest chapters in American history."

I wish I could tell you that this kind of material wasn't relevant today, because we've moved past this kind of systemic racism, but unfortunately, it's even more important now that we're reminded of what can happen within our society when a group is pushed past its breaking point.