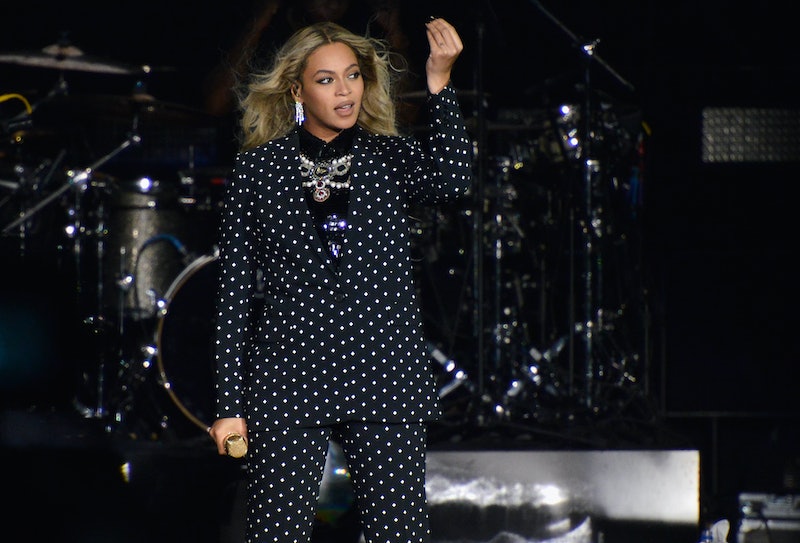 It looks like a bey-by is on that way for Carters, according to an Instagram post from the queen herself. Yes, Beyoncé is pregnant, and after delivering us little Blue Ivy, I'm curious about what Beyoncé is going to name her baby. I mean, I'm sure might want time to maybe mull her options over, but it's never too soon to speculate. That said, it might just turn out that we have to speculate twice as hard. It seems as though Beyoncé is heavily hinting that she's having twins. The not-so-cryptic caption reads as follows:

We would like to share our love and happiness. We have been blessed two times over. We are incredibly grateful that our family will be growing by two, and we thank you for your well wishes - The Carters

"Blessed two times over?" "Growing by two?" No subtext there. So I guess it's more about what will Beyonce name her two babies. I think it's a safe bet she won't go for anything conventional, or a weird, complementary, rhyming set of names. So then where will she cite her baby name inspiration? Maybe it helps to look back to why Blue Ivy is called... well, Blue Ivy.

In 2012, Beyoncé posted an excerpt from Rebecca Solnit's A Field Guide To Getting Lost onto her Tumblr, and the passage explained the significance of the color blue. It speaks of how "the world is blue at its edges and its depths," speaking of how since blue disperses light in a specific way, it colors everything significant, be it the waters, or the sky. It concludes with, "This light does not touch us, does not travel the whole distance, the light that gets lost, gives us the beauty of the world, so much of which is blue."

Implication being, Beyoncé didn't half-ass her baby name, picking it out of a Crayola box arbitrarily. She turned to creative forces for something profound, something poetic. That makes me wonder if she might use the same method to name her baby (or babies) this time around. If you replay the works of Warsan Shire, or if you reread the best of Maya Angelou, you could possibly find Bey and Jay's next children. Maybe.

I'm very excited that in the midst of these entirely strange times, Beyoncé is able to grace us with something good. Here's hoping that when she delivers those bundles of joy, she also delivers one or two (or four, because she could double up on double names) unusual monikers.