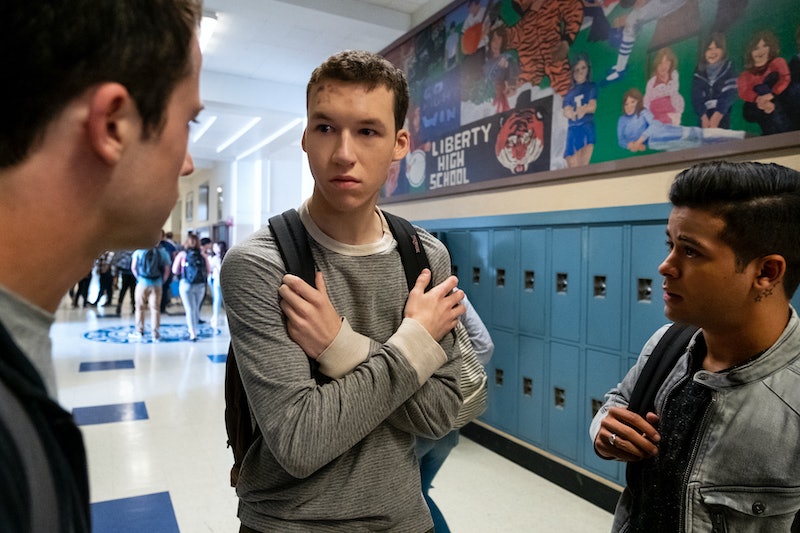 Spoilers ahead for the 13 Reasons Why Season 3 finale. Tyler Down has been through a lot. Like all the other 13 Reasons Why characters, Tyler has gone on a journey from being one of the selfish, toxic people Hannah named on her tapes to a more thoughtful, fully-formed person in his own right. While Season 2 saw Tyler brutally sexually assaulted and determined to carry out a school shooting, Season 3 featured him finally getting closure and healing after what happened to him. Tyler is in a healthier place now than he's ever been, which is what makes the reveal at the end of Season 3 such a gut punch. Now that his gun stash has been found in the river, we're left wondering what will happen to Tyler in 13 Reasons Why Season 4.

In earlier seasons of 13 Reasons Why, Tyler embodied the image of a disaffected, white male school shooter. He was socially awkward and didn't understand boundaries, and was often caught spying on people. After Clay releases a naked photo of Tyler in revenge for Tyler leaking a photo of Hannah, Tyler is heavily bullied by his peers. So he begins amassing guns and fantasizing about hurting those who hurt him.

Eventually, Tyler has a run-in with Monty and the other toxic jocks of Liberty High, who beat and sexually assault him with a mop handle. This causes Tyler to emotionally break, and he tries to act on his school shooting fantasy, leaving a suicide message behind for his mom. It's only because Clay talks him down before he enters the school dance and subsequently gets Tony to hide the guns that Tyler isn't in jail in Season 3. Right at the end, 13 Reasons Why subverts the narrative of the angry male shooter, and paves the way for a redemption arc.

But Tyler isn't well in the new season. He shows all the signs of a sexually abused teen, according to RAINN: he's depressed, has a ton of anxiety, and is covered in bruises. He's fearful of everyone, and he doesn't like being touched. When Clay sets up a monitoring schedule so that he's never left alone, Tyler doesn't say anything. He just drifts from chaperone to chaperone, trying to make himself as small as possible.

For most of the season, Clay and the rest of his friends don't look too much into his behavior. They see this as just Tyler being his uncomfortably weird, usual self. It's not until Mr. Porter tells Clay that Tyler is acting markedly different that Clay becomes aware that something is really wrong. And so Clay confronts Tyler, and Tyler finally admits to someone what happened: he was raped, and he's suffering from PTSD.

This admission ends up being the first step towards Tyler's healing, and the growth Tyler goes through is remarkable. Tyler's story allows 13 Reasons Why to comment on the less commonly reported, but still pressing issue, of male rape victims. Tyler finds community in Jessica's sexual assault victim support group, HO, and even finds the bravery to eventually stand up at the joint school assembly and announce that he's a survivor. Robby, another male victim of assault, thanks Tyler afterwards for "being the first guy to stand up," and joins HO as well.

Tyler also takes solid steps towards acknowledging the crime by attending therapy and even, with the support of Charlie, reporting the assault to the cops. By the end, Tyler has the support of Clay and the rest of the usual crew, Charlie, and even Cyrus and his friends. The show ends on Tyler unveiling his photography series at Monet's, as his new circle of friends surround him. It's a powerful message that with proper emotional support, people can overcome trauma and change.

The guns being found in the river may throw a wrench in Tyler's recovery, though. Deputy Standall now knows the school shooting threat wasn't a prank. The guns will likely be able to be traced back to whoever purchased them, which definitely doesn't bode well for Tyler. If he ends up being convicted for the attempted school shooting, all the healing he did in Season 3 may be unfortunately be washed down the drain in Season 4. Jail isn't exactly conducive to having sound mental health, so fingers crossed Clay and company can figure out how to put out this new fire.