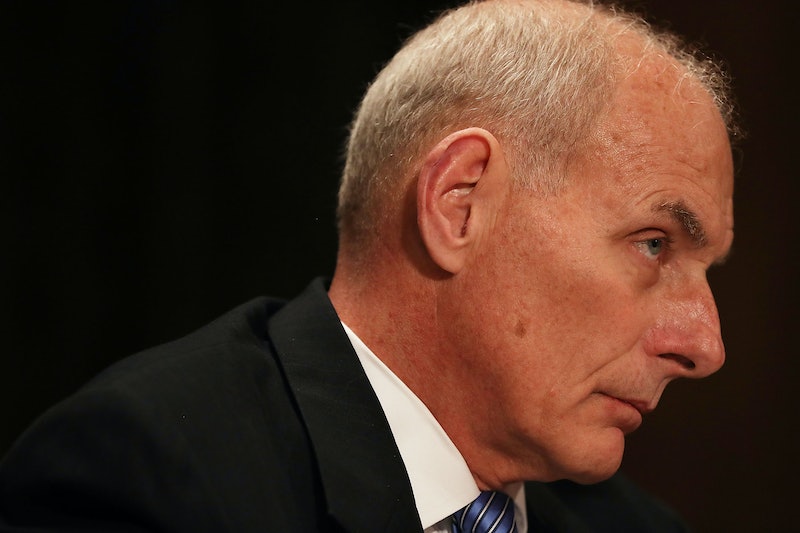 On Friday, President Donald Trump abruptly tweeted news of a major shakeup in the White House: Reince Priebus was out, and retired Gen. John Kelly was in. The Homeland Security secretary is expected to replace Priebus, who quietly resigned Thursday, sometime this week. But John Kelly's appointment as chief of staff could create some waves in the White House.

The White House chief of staff is traditionally seen as the White House's highest-ranking employee, tasked with overseeing the Executive Office of the President. Those serving in the position have been nicknamed "the gatekeeper." This brings us to what many have pinpointed as one of Priebus' most notable failures: his inability to control or even influence who gets access to the president. According to Andrew Prokop of Vox, "It's important that the chief be at the top of a clear chain of command."

It remains unclear if Kelly, a retired general who spent 45 years in the Marines, will be able to establish the chain of command that seemed to have eluded Priebus. In an interview on Fox News on Sunday, counselor to the president Kellyanne Conway wouldn't say if she or newly-appointed Communications Director Anthony Scaramucci would report to Kelly. Although Conway wouldn't say who she'd be reporting to, she did mention she "will do whatever the president and our new chief of staff, General Kelly, ask me to do," adding she was "always a protocol-and-pecking-order kind of gal."

Political commentator Charles Krauthammer told Fox News that Kelly's success would likely depend largely on whether Scaramucci reports to Kelly or Trump. Previously, however, Scaramucci had said he'd work with then-White House Chief of Staff Priebus but would report "directly" to the president. To his credit, Kelly has been described by a friend as someone who "won't suffer idiots and fools."

Although confusion over the White House's chain of command continues for now, many believe Kelly's friendly relationship with Trump may enable him to be a more effective chief of staff than his predecessor. While Priebus reportedly had an increasingly fraught relationship with the president, Kelly's aides recently told Politico their boss has become quite close with Trump, even managing to form a personal rapport with the president.

So far Kelly has proved to be a staunch defender of Trump, supporting his executive order on immigration as "lawful and constitutional," arguing leaks are "darn close to treason," and defending Jared Kushner, Trump's son-in-law, against scrutiny of his meetings with Russian officials. But there might be one area where the two disagree. While Trump still appears unconvinced that Russia attempted to meddle in the 2016 election, Kelly expressed his support for the intelligence community's conclusions just last week.

Kelly's appointment as White House chief of staff has many hoping his no-nonsense leadership style will put an end to reports of scandal, gaffes, infighting, and leaks within the White House. But with confusion still lingering over the chain of command within the White House (as well as messaging on Russia and the election), it remains to be seen how effective Kelly will be.