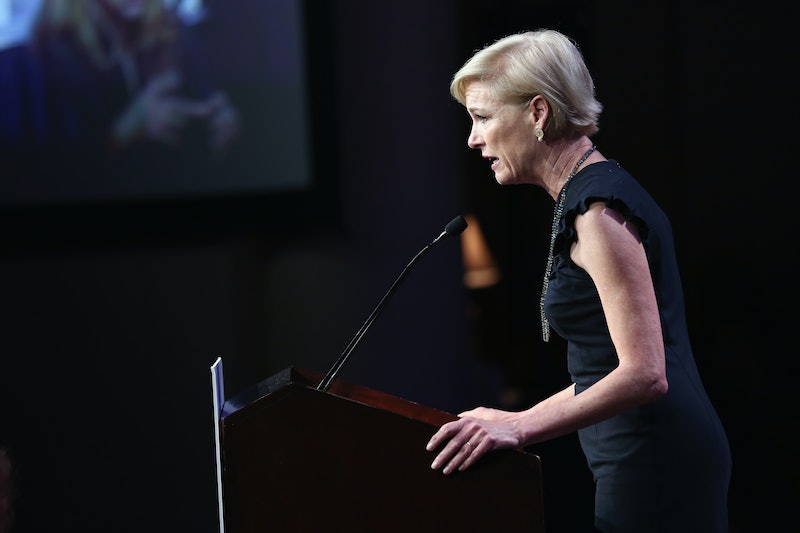 It was difficult to keep up with all the twists and turns of Congress' multiple failed attempts to repeal and replace Obamacare earlier this year. One constant remained in each new proposal, however: stripping Planned Parenthood of funding. Though health care reform efforts have stalled, the battle against the women's health care organization isn't going anywhere. It's worth taking a look at what would actually happen if Planned Parenthood were "defunded."

Mallory Quigley, communications director for the anti-abortion group the Susan B. Anthony List, tells Bustle it would look something like this: "Taxpayers would be disentangled from the grisly abortion industry and get a better return on their investment in women’s health."

However, it's important to understand that money Planned Parenthood receives from the government comes in the form of Medicaid reimbursements, meaning low-income women go to clinics for health services and their insurance (i.e. Medicaid) pays for those services. Because the Hyde Amendment already prevents any federal dollars from going toward abortion procedures, these reimbursements are strictly for preventative services such as birth control, cancer screenings, and annual exams.

Here's what would happen.

Millions Of Women Would Lose Their Health Care Provider

"Women and families across America would be devastated if Planned Parenthood were defunded," Kaylie Hanson Long, national communications director for NARAL Pro-Choice America, says in a statement to Bustle.

More than 2 million people visit Planned Parenthood clinics each year, more than half of whom rely on Medicaid for health insurance. "Defunding" the organization would thus force more than 1 million people who currently utilize its health centers to find a new health care provider.

That is, if there's even another one nearby. More than half of Planned Parenthood clinics are in rural or medically underserved areas, according to the organization. And the American Congress of Obstetricians and Gynecologists and National Partnership for Women and Families warned earlier this year that other doctors wouldn't be able to take on all Planned Parenthood's patients.

However, organizations pushing for Planned Parenthood to be defunded disagree.

Texas was no different when the state directed family planning money away from abortion providers in 2011. One-fourth of the Lone Star State's family planning clinics had closed two years later, according to a Texas Policy Evaluation Project (TxPEP) study.

Of course, when clinics close, even more women are left without a health care provider. The four closures in Iowa left an estimated 14,600 patients without access to their regular doctor.

The same would happen nationwide if Congress were to strip Planned Parenthood's funding.

Getting An Abortion Would Become Even Harder

Thanks to mandatory waiting periods, required counseling, and a lack of providers, getting an abortion is already an incredibly time-consuming and difficult task in many states. But defunding Planned Parenthood would limit access even further.

When Texas clinics were forced to shutter, women who lost their closest clinic had to drive an average of 85 miles to get an abortion, the TxPEP study found. Some had to drive more than 250 miles.

Obstacles such as distance compound for low-income women who can't afford to take off work, secure childcare, and stay in a hotel in order to end a pregnancy, especially considering 27 states require women to wait at least 24 hours after receiving mandatory counseling to actually have an abortion. This forces women to drive hours in each direction more than once or pay to stay near the clinic.

When congressional Republicans refused to sign off on a federal budget that kept funding for Planned Parenthood in 2015, a report from the nonpartisan Congressional Budget Office (CBO) predicted that defunding the organization would lead to more unplanned births.

This has already been proven in — you guessed it — Texas. After the state cut off funds to Planned Parenthood, births among low-income women who previously got birth control increased.

Federal Spending Would Increase, Too

Having control over their own reproductive lives allows women to start a family when it's right for them and their career. A new study by the Small Business Majority found that 56 percent of female small business owners agreed that access to birth control and the ability to decide if and when to have children allowed them to advance in their career and start a business.

If millions of women lost that autonomy, the number of women starting new businesses would likely stagnate at best. Since women are already less likely than men to become entrepreneurs, less control over if and when they start a family would only worsen the gender gap.

There's not currently an imminent threat that Congress will successfully defund Planned Parenthood. The attempt to cut off its funding was a major reason the GOP's Senate health care reform efforts failed this summer when female Republican senators voted against party lines to protect women's health care.

Nevertheless, anti-choice politicians and organizations continue to advocate for stripping Planned Parenthood of Medicaid reimbursements, so don't expect the debate to disappear.