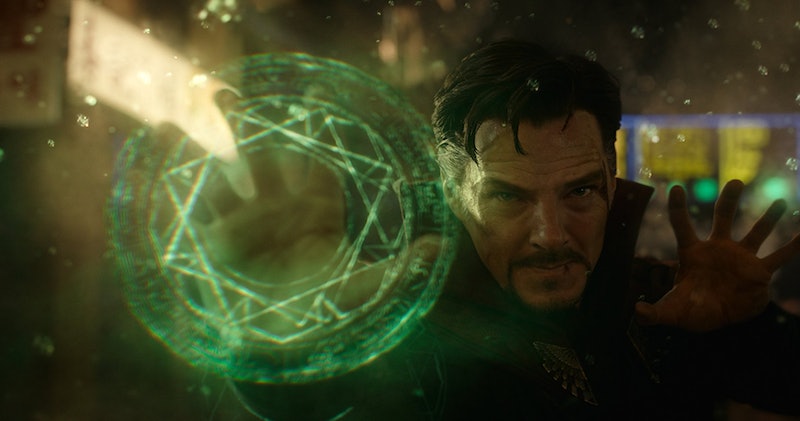 Fans of the MCU are desperate to get their hands on spoilers for Avengers: Infinity War, out April 27. Everyone involved in the film, on the other hand, has kept so mum on the subject that you'd think they'd signed a real-life Sokovia Accord. There've been a few minor hints from Infinity War's stars slipped in interviews, but mostly, fans have been left to their own devices to craft up a few intricate theories about what will happen in the new movie. The main idea is about time travel, but what the Infinity War time travel theory will do exactly is not totally known. It might mean, though, that next year's Avengers 4 might end up consisting of a similar plot as the film coming out this month.

As CBR explains, the Infinity Gauntlet comics ended with Thanos actually triumphing over the Avengers. The site then explains that some believe that, should Thanos succeed in collecting most of the Infinity Stones, then Doctor Strange will use the Time Stone to go back in time to give the Avengers another shot. If that were the case, it would make sense if the second go around with Thanos takes place in Avengers 4 considering that, according to Screen Rant, Avengers 4 was called a "Part 2” to Infinity War when it was announced. Should Infinity War actually involve going back in time to change certain things about Infinity Stones and such, then Avengers 4 will probably have Thanos as the villain again.

As mentioned before, a few of the main clues that time travel plays a big part in Infinity War have come from the stars' interviews. During a Good Morning America appearance in early April, Benedict Cumberbatch revealed that he was the only cast member who read the full script for Infinity War. "I had to sort of understand what the context was… I’m kind of trying to hold the multiverse together so kind of needed to know what goes on between the brackets," the actor said.

That right there seems to reveal just how important Doctor Strange will be in the upcoming Avengers movie, and it might even be worth re-watching the superhero's standalone film before heading to see Infinity War — don't act like you weren't planning to have a massive Marvel marathon anyway.

It definitely seems like Cumberbatch's character plays an integral role in Infinity War, just based on the trailers. In one clip, Doctor Strange tells Tony Stark, "I went forward in time to see all the possible outcomes." Stark asks, "Did we win any?" And Doctor Strange gives him a grave stare. It doesn't look good — but wait, what does that even mean, "possible outcomes?" That's where another time travel theory comes in.

Another major theory shared by Screen Rant claims that Infinity War involves multiple timelines, meaning that different things happen in different dimensions, all at once. With the Time Stone — one of the Infinity Stones which Thanos so desperately seeks — Doctor Strange can manipulate time to go backwards or forwards. He can basically test out different variations of battle techniques against by going forwards and then backwards again.

One Twitter user, @mcuhollnd, guessed that this timeline theory may prove true, and it may result in audiences watching their favorite characters die multiple times. The same user theorized that Avengers 4 will reveal the only chain of events that actually will take Thanos down, after multiple failed attempts which you might see in Infinity War.

Really, so many things could happen in Infinity War. While talking to The Independent, Sebastian Stan (who plays Bucky Barnes) described filming a huge battle scene. "You look around and you just saw everyone from Samuel L. Jackson to Michael Douglas to Michelle Pfeiffer. Everybody was there."

As The Independent pointed out, Pfeiffer's character, the Wasp, supposedly got lost in the Quantum Realm many years ago, so if she showed up to battle alongside the Avengers, then that could mean that Doctor Strange went back in time to prevent her disappearance. Or, maybe Doctor Strange's tinkering with time ends up causing the Wasp's demise.

It's hard to know exactly what role time travel will have in Infinity War, but almost everyone agrees that it will play out in the upcoming Marvel movie. Hopefully it won't be too confusing, or brutal for beloved heroes.