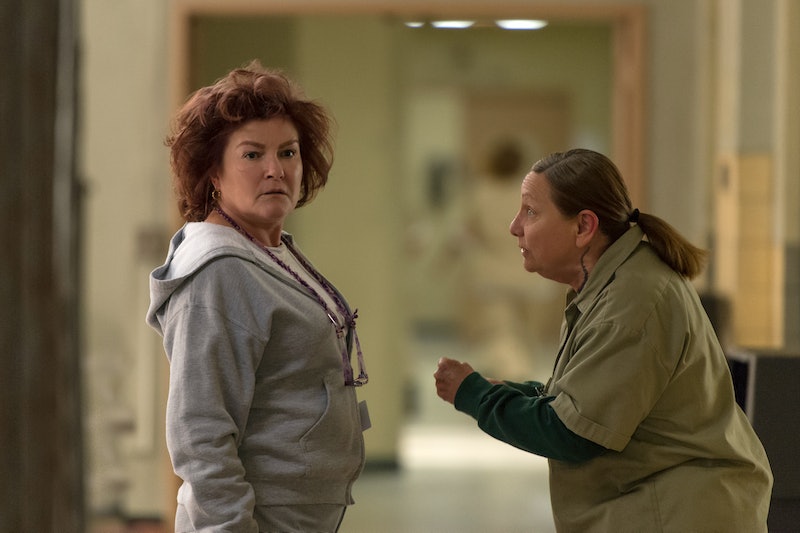 In flashbacks in Episode 9 we saw Galina Reznikov, also known as Red on Orange Is The New Black, as a young woman in the Soviet Union. Fans now know how she met her future ex-husband Dmitri, the other kinds of boys she was dating at the time, what her natural hair color is, and that her best friend disappeared after getting involved with a revolutionary crowd.

By the looks of a banner outside of Galina's workplace, references to the Party Leader Leonid Brezhnev and a few posters on her short term boyfriend's wall, it appears to be 1977 — the year of Star Wars, the New York City Blackout, and Roots. That happens to be the year that the Soviet Constitution was adopted, right in the middle of the Soviet era in Russia, which officially ended in 1991. This particular era in the Soviet Union is known as the Brezhnevian Stagnation, when the economy stopped growing and morale was low.

It's also around that time that Red and Dmitri left the Soviet Union and came to the United States — which is significant because emigration was illegal at the time. Those escaping the Soviet Union were defectors. However, Dmitri discovers that Jewish Russians were starting to be granted permission to leave. That's why Galina was impressed with Dmitri's desire to go to America together. He was more of a revolutionary than her blue jeans-peddling, long-haired hippie beau. At Litchfield, Red may be more of a protector who works within a system to better the status quo — but she has always been forward thinking, well before the events of Orange is the New Black.