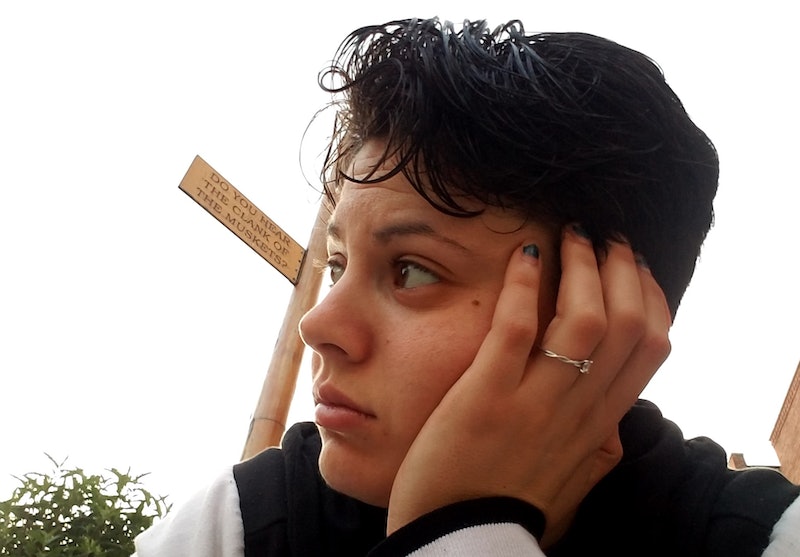 In the week between Rosh Hashanah and Yom Kippur, I was so exhausted that I went to the wrong train station, twice, on my way to meet friends. It was raining. My boyish hair was freshly cut, and I was wearing a shirt and tie. A young Orthodox woman was standing on top of the subway steps, trying to figure out how to get down with her baby's stroller. I picked it up and journeyed the two flights down, in the rain and in rush hour, with her.

Even though it was only a few days after Rosh Hashanah, the Jewish New Year, I tripped over my words trying to wish her gut yontif or shanah tovah. Despite our external differences — her traditional performance of gender, my trans masculinity — I felt compelled to observe our shared Jewishness with this seemingly simple ritual. I wished I'd been wearing a kippah, as a nonbinary trans boy, to call out to her that I, too, am thinking about atonement this week.

I've never worn a kippah — the head covering Jewish men wear in synagogue — but I remember wanting to at my cousin's bat mitzvah, when I was 15 or so years old. I wondered why I couldn't wear one like the other boys did, why I had to sit on the wrong side of the shul. I wondered why both the men's and the women's sides, divided per orthodox tradition, felt wrong. Why both sides were the wrong side. After another 15 years, I now feel more at home in my gender as a nonbinary trans boy. But I'm still wondering how my desire to be a good Jewish boy fits in. And on Yom Kippur, the day of atonement and the most solemn holy day of the Jewish year, I wonder if wearing a kippah in this highly gendered mental and spiritual time is a sign of disrespect — or, if it's a wholly appropriate way to begin this new year.

In my early twenties, the traditional rhetoric of Yom Kippur, coupled with gendered expectations of how to express your spirituality, manifested as an expectation to suffer, especially on high holidays, in service to others in ways that cause rather than heal pain. Yom Kippur is a holiday built around suffering, where Jews are meant to fast from sundown to sundown a week after the new year begins, in order to atone for the sins of the year. But this expectation disproportionately burdens Jewish trans women, queer Jewish women, Jewish women of color, who may often be expected to suffer in silence through only giving and rarely receiving, throughout the rest of the year, too.

And these expectations, as in all of society, can burn toxicity into men and masculine folks, who are too often praised for how well they conceal their feelings behind a practiced stoicism. And trans and nonbinary folks? We have to build our own interpretation of atonement as queer Jewish folks, I suppose.

Wearing a kippah, then, becomes a reminder of that mitzvot — that devotion to the service of others, like the woman with her stroller — I want to move through the world performing. I want to wear a kippah because I have been shamed for too long, in atonement for too long, for my masculinity that was never wrong, that only brought me immense joy (until other people decided it shouldn't).

My transness is not something to atone for, but on Yom Kippur, I want my gender to signal my service to others, my commitment to transforming what is wrong with the world and my part in it. The question of how to be a good masculine person in the context of tikkun olam, the compulsion to do good, using my masculinity to heal, to honor, to create instead of take space... all these are grave questions, and they always need to always be asked with gravity. Yom Kippur is the perfect time to ask them, to recommit to action in the world.

But I think this is the last year I will contemplate these questions without a kippah. Because next year, I want to truly move through the world feeling trans enough, feeling Jewish enough, to wear my commitments to others, to my authentic self, on my body.

More like this
How To Come Out Online, According To Trevi Moran
By Melanie Mignucci
The 3 Dating Apps Queer Women & Nonbinary Folks Actually Like
By Emma Carey
Jujubee’s Humble Reminder
By Sam Ramsden
GIRLI & Q Fell In Love At A Skatepark & Never Looked Back
By Jessica Morgan
Get Even More From Bustle — Sign Up For The Newsletter