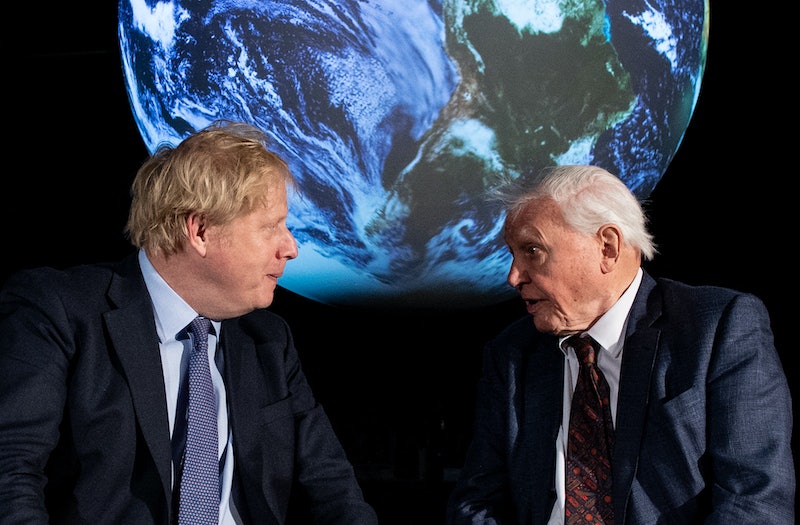 Between school children striking and people taking to the streets in protest, the climate crisis is moving into public consciousness at a rapid rate. And, as we all know by now, it’s something that can’t be tackled by just one country. That’s where events like COP26 come into play. But what is COP26, and why was it being spoken about today?

UK Prime Minister Boris Johnson officially launched the 26th UN Climate Change Conference (COP26) today (Feb. 4. 2020) with a speech at the Science Museum. He was joined on stage by David Attenborough, who told the crowd: "It is up to us to organise the nations of the world to do something about it."

Johnson also launched a 'Year of Climate Action,' emphasising that he wants the UK to "lead the way" on climate action. In light of this, the PM has announced that the UK are working towards a ban on selling petrol, diesel, and hybrid cars by 2035.

However, these announcements come hot on the heels of the controversy surrounding the removal of Claire O’Neill, the former chair of the COP26 conference. (She was removed from her post on Feb. 1.) Earlier today, O’Neill stated that she doesn't think climate action is being taken seriously enough by the Prime Minister. Speaking on the BBC's Today Programme, O’Neill claimed Boris Johnson had said to her he "doesn't really get" climate change.

O’Neill continued: "My advice to anybody to whom Boris is making promises – whether it is voters, world leaders, ministers, employees, or indeed family members – is to get it in writing, get a lawyer to look at it and make sure the money's in the bank."

Aside from what's been going on this week, here's everything else you need to know about the COP26 Conference.

First established in 1995, the UN Climate Change Conference is an annual event bringing together the UNFCCC Parties to discuss progress in dealing with climate change.

This year, the 26th UN Climate Change Conference (COP26) will gather together "over 30,000 delegates including heads of state, climate experts and campaigners to agree coordinated action to tackle climate change," as the official website reads. "The challenge is not insignificant, but we must step up to it to save the environment we all live in. The UN Climate Change process is central to that collective action," it continues.

When & where is COP26 taking place?

This year, for the first time, it falls to the UK to host the UN Climate Change Conference. Despite being launched today, COP26 will actually take place from Nov. 9-20, 2020, at the Scottish Exhibition Centre (SEC) in Glasgow.

This will be the biggest conference ever staged in Scotland. Glasgow was chosen to host such an important event for a number of reasons. For starters, Glasgow can actually be translated to mean “Dear Green Place”. On top of that, it’s the highest in the UK on the Global Destination Sustainability Index and its proven capable of holding large events in the past such as the 2014 Commonwealth Games.

What will be discussed at COP26?

At this moment in time, details about what will be discussed at the 26th annual conference are sparse. However, talking points are likely to be released as the year progresses, so watch this space.

More like this
Iran Has Issued A Death Sentence Over Mahsa Amini Protests
By Catharina Cheung, Darshita Goyal and Maxine Harrison
What To Know About Martin Bashir After Watching 'The Crown'
By Bustle UK
Jude Bellingham’s Superstar Football Talent Runs In The Family
By Maxine Harrison
How Princess Anne Broke The Rules Of Royal Divorce
By Sophie McEvoy
Get The Very Best Of Bustle/UK