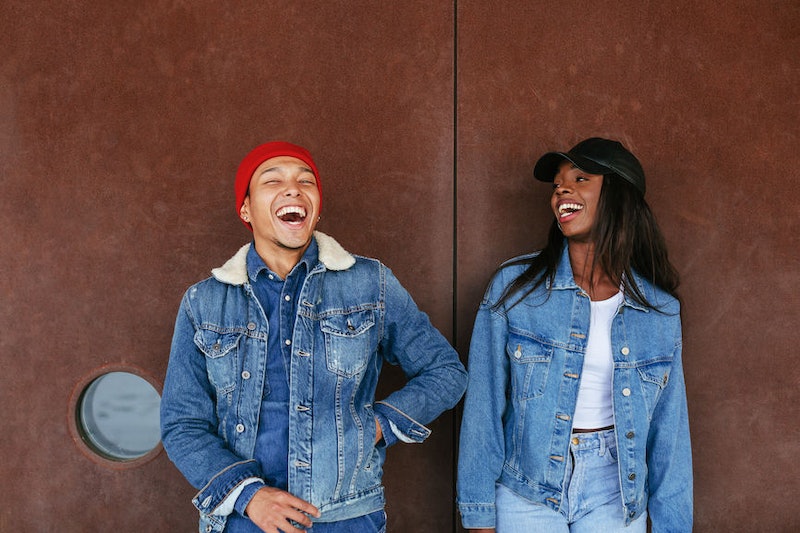 There are a lot of different flirting styles out there. Some people are explicit, others more coy, some are just clumsy and awkward and just hope for the best.

"When you're nervous, it's even more difficult to come across clearly with your intentions, usually because of fear of rejection," author and life coach Jaya Jaya Myra tells Bustle, but flirting is still one of the best ways to initiate something romantic or sexual — and a safe way to gauge is the other person's interest. And new research shows that what we want from relationships might be influencing the way that we flirt.

A study of 1,300 participants published in the journal Evolutionary Psychological Science, looked at whether people always use straightforward flirting techniques or if they sometimes used more protean — changeable and unusual — strategies. While straightforward strategies included things like eye contact, playing with your hair, and asking for advice, atypical strategies included offering a foot rub, reciting Shakespeare, or buying a present for someone's mother, according to the researchers. The study found that those looking for uncommitted sexual relationships were more likely to use atypical flirting strategies — and that men were more likely to use atypical strategies than women.

“Probably the most surprising part was the interesting mismatch between the use and preference for atypical flirting behaviors," Dr. Carin Perilloux, assistant professor of Psychology at Southwestern University and study author, tells Bustle. "We were surprised that short-term maters indicated they would use atypical behaviors given that no one, including other short-term maters, seemed to like them! One would think that these unexpected strategies must work some of the time or else no one would use them, but our study seems to indicate the opposite."

But as Dr. Perilloux says, the study didn't evaluate the "timing, frequency, and delivery" of the unusual flirting strategies and the situations were hypothetical. "[P]erhaps with just the right scenario, these might pan out for short-term maters in reality," Dr. Perilloux says.

Clarity keeps everyone happy, and stops you from putting yourself out there only to realize you've misinterpreted the other person's behaviors.

"Our results converged on the conclusion that recipients prefer the certainty of being someone’s flirting target, even though people pursuing short-term mating might behave otherwise," Dr. Perilloux says. "We think this is because when humans flirt, the point is to show subtle interest — to have plausible deniability in case of rejection — while attempting to gauge the other person’s interest as accurately as possible. To use a poker analogy, it’s best to know with certainty what other players are holding, while at the same time keeping one’s own cards a secret — that way I can choose if and when to show my hand."

Everyone has their own unique flirting style, but it is interesting to see that those who are more interested in something quick and casual are willing to think outside-the-box and go beyond making eye contact. But when in doubt, good old-fashioned flirting seems to be the way forward — don't be afraid to make it clear that you're interested.