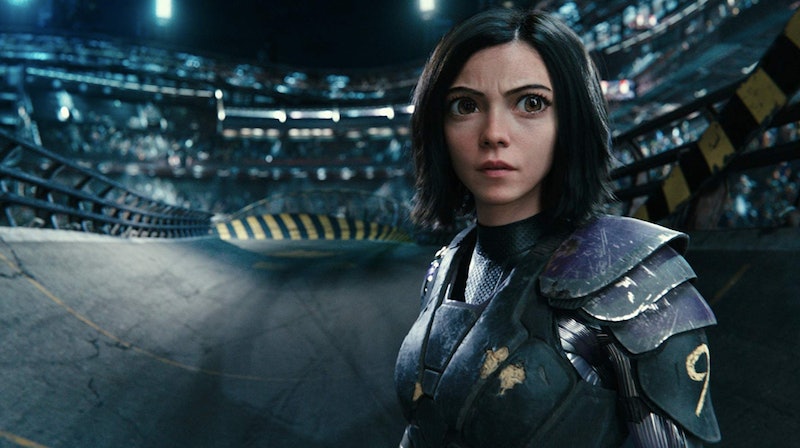 Filmmakers James Cameron and Robert Rodriguez are joining forces for the upcoming cyberpunk fantasy-action flick, Alita: Battle Angel, out Feb. 14. The film follows cyborg Alita (American Horror Story: Murder House actor Rosa Salazar), who is found in a post-apocalyptic scrapyard by Dr. Ido (Christoph Waltz), but has zero recollection of who she is. The doctor takes her in and adopts her, but as Alita begins to have flashbacks of her past, she sets out to find out more about who she is. But this movie isn’t an original story. It’s actually based on the 1990-1995 Japanese manga Battle Angel Alita, also known in Japan as Gunnm, and the film stays true to the manga’s main plot.

In the manga, much like in the movie, Alita is found by Dr. Igo, who takes her in and names her after his beloved late cat. But Alita shortly remembers she possesses the skills of legendary martial art Panzer Kunst, and becomes a hunter-warrior, killing evil cyborgs. Through combat, she begins to piece her memories of her past. There are nine volumes of the manga, following Alita’s adventures as she finds out more about who she is.

And, in addition to the manga, there's also a two-episode anime based on the books. The anime was released in 1993 as an OVA (original video animation), meaning it’s an anime that served as promotion for the manga itself, per Anime News. But this live-action version of the story has been in the works for a long time. In the aforementioned 2005 Anime News interview, the manga’s creator Yukito Kishiro mentioned that James Cameron had officially decided to turn it into a film. But Kishiro points out that long before that, Cameron had already expressed interest. “I think it was around 1998 when Mr. Cameron and Twentieth Century Fox approached me on the adaptation,” said the manga artist.

In the interview, he also expresses his hesitance over Cameron’s decision to make a CGI-heavy film, saying “To be honest, I am anxious.” But in 14 years, a lot has changed. Cameron decided that instead of directing, he’d have a role as co-screenwriter in the film (Laeta Kalogridis and Rodriguez co-wrote as well), and Rodriguez would be the director, but the film would still have a similar style to some of Cameron’s previous work, per The Hollywood Reporter.

And now, Kishiro fully trusts the filmmakers. In a 2018 interview, Kishiro told The Daily Crate that he received the Japanese translation of the script and had high praise. “If you can trust the word of the guy who created the story in the first place, it’s really good! But I haven’t requested any changes or corrections of any kind to the script I saw,” explained Kishiro. “In January 2017, I visited the set in Austin and got to meet Robert Rodriguez and members of the movie crew. I really felt a strong enthusiasm and respect for the source material from them. So I put my full trust in them to make the movie as they see fit, and I’m looking forward to the film as any other viewer would.”

With the film being in development for so long, it’s clear that Cameron put as much effort into turning it into a film as he did his CGI hit Avatar. And with Kishiro’s approval, fans of the manga won’t be disappointed.