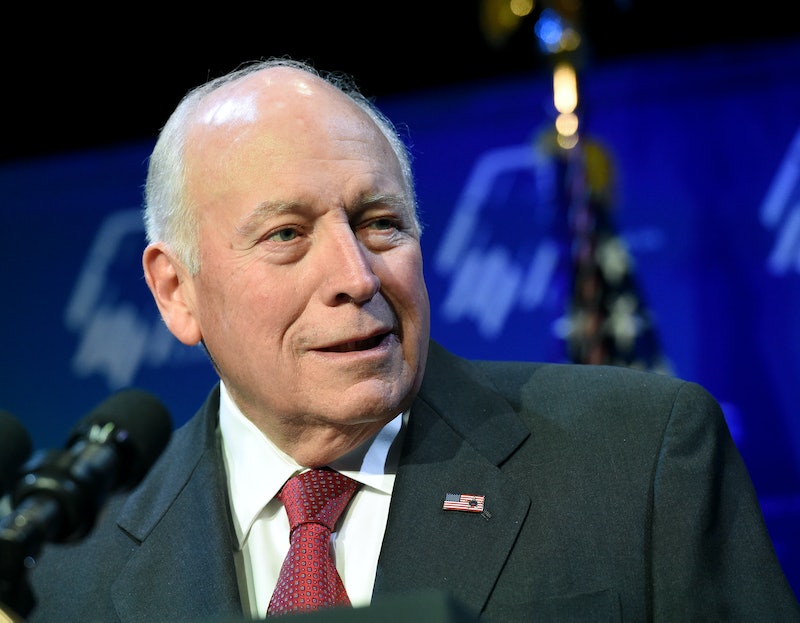 The new Adam McKay-directed biopic filmVice offers an inside look at Dick Cheney, arguably the most powerful vice president in the history of the United States. The film's story spans 50 years of Cheney's life, taking the viewer from his troubled college days (he flunked out of Yale and was arrested for DUI more than once) to his time as chief of staff to one president, secretary of defense to another, and vice president to a third. But one aspect of Cheney's life the movie doesn't cover much is what he's up to now. So, what's Dick Cheney doing in 2018?

Dick Cheney ceased being vice president in 2009 when Joe Biden took over the role in the Obama administration, but the political heavyweight didn't exactly go gentle into that good night. He has remained politically active, and was very critical of President Barack Obama in numerous television interviews during his tenure. He began criticizing Obama's handling of national defense and terrorism almost immediately after the president took office, and in 2014 Cheney called Obama "the weakest president [he'd] seen in his lifetime" in an appearance on the popular Fox News propaganda series Hannity. However, he did commend President Obama on some accomplishments, like the 2011 mission that killed Osama bin Laden. In 2012, after a number of heart attacks and surgeries, Cheney underwent a successful heart transplant and is today noticeably thinner than his days in office, and in 2015 he co-authored a book with his daughter Liz Cheney pushing for neo-conservative national security policies.

A lifelong conservative, Cheney broke with his party and came out in support of gay marriage in 2009 — the reason being that his daughter, Mary Cheney, is a lesbian. However, many gay rights activists criticized Cheney for waiting until he was out of power to publicly support the issue, as the Bush Administration — of which Cheney was arguably the most powerful figure — was very publicly against gay marriage.

While the bulk of republican politicians have moved to the right to accommodate Trump's policies, Cheney has publicly pushed back against some of Trump's proposals. In 2015, he said then-candidate Trump's Muslim ban "goes against everything we stand for and believe in" as a nation, according to The Week. In a Sept 2018 speech in Mexico, Cheney was critical of Trump's racist statements about that country's citizens, saying, "I disagree with Donald Trump on how he describes our Mexican neighbors," according to The Hill. Cheney has also been critical of Russia's pro-Trump interference in the 2016 presidential election, which many republicans in congress have downplayed, saying it "could be considered an act of war," in 2017, according to Salon.

But despite his thoughts on gay marriage and (infrequent) Trump criticisms, Cheney — who currently holds no government position — remains a cheerleader for conservative policies. He gives speeches and makes television appearances to push a republican agenda, and he helped his daughter Liz win her bid to become Wyoming's sole representative in congress. Next year, Liz Cheney is set to become the third highest-ranking republican in the House after just two years on the job, suggesting the apple didn't fall far from the tree when it comes to political savvy.