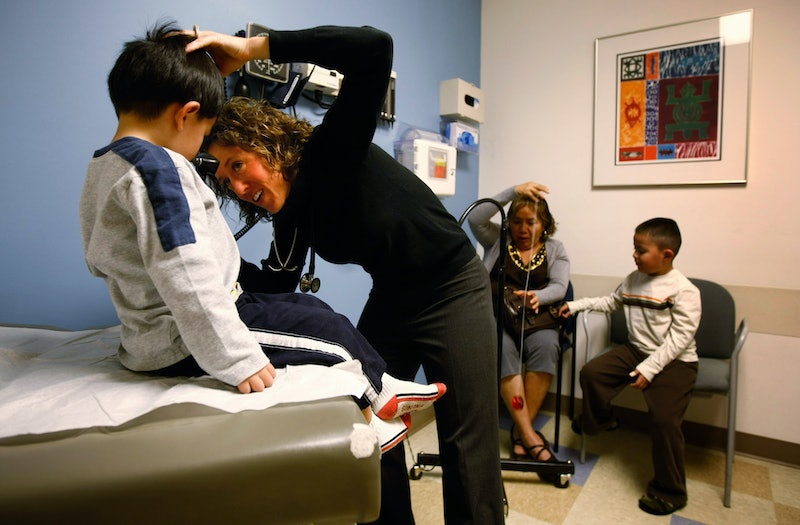 In the wake of the House and Senate passage of a massive tax bill, one looming questions remains: what's happening with CHIP, the Children's Health Insurance Program? Funding for the program, which provides health insurance to children through state and federal government funding, expired in September. So far, states have been working to fund it in other ways but many are running out of options — and Congress might not fund it before the year is up.

The Georgetown University Center for Children and Families estimates that 25 states would run out of CHIP funding if Congress doesn't act before the end of January, leaving 1.9 million children at risk of losing their health insurance coverage. But on Wednesday, some lawmakers suggested that the program wouldn't be funded by the end of the year. MSNBC's Sam Stein tweeted that Sens. Susan Collins, of Maine, and Lamar Alexander, of Tennessee, had confirmed that the program "won't be renewed this year."

One issue is that CHIP has largely taken a back seat to the massive tax bill spearheaded by Congressional Republicans. The cost to fund the program (it cost the federal government $13.6 billion in 2016) is a small fraction of the cost of the $1.5 trillion tax reform bill.

Already, the effects of CHIP's expiration are beginning to be seen throughout the country. A story by The Daily Beast detailed how it is affecting recipients in in Alabama, where families are being warned that their children could be dis-enrolled from the program soon. In Connecticut, the story is similar. Meanwhile, in Colorado, pregnant women due in February are being told that their health coverage might expire before they give birth. The state of Virginia is expected to exhaust its federal funds by the end of January, with Gov. Terry McAuliffe saying enrollment would be frozen Jan. 1 as a result.

Democrats are fighting back, urging their Republican counterparts to reauthorize the program as soon as possible. California Rep. Jackie Speier said in a Wednesday news conference,:

This is the ultimate bad Christmas carol story. This may be the most shameful day in the history of Congress. What we're doing here today is basically saying, 'Wealthy Americans, big fat Christmas present for you; Tiny Tim, we're taking your crutch away from you and all the other kids in this country, and we're putting a lump of coal into your Christmas stocking.

On Twitter, Speier noted that 1.3 million children in her home state rely on CHIP.

In early November, the House voted to reauthorize CHIP under the Championing Healthy Kids Act, a move Democrats largely opposed, saying it would cut billions from public health programs. Speaker of the House Paul Ryan, meanwhile, argued the House bill would allow children to continue benefitting from CHIP for five more years, saying, "the most vulnerable depend on it."

In the Senate, however, moves to fund the bill have not been as successful. As Democratic Sen. Bob Casey noted in an op-ed in USA Today, the Keep Kids’ Insurance Dependable and Secure (KIDS) Act of 2017 was introduced in the Senate. Like the House bill, the KIDS Act would would reauthorize CHIP for five years. Ultimately, the tax bill took center stage, though, and the Senate bill has yet to go up for a full vote. The future of the program's funding now remains uncertain, especially with Congress slated to leave for the holidays on Friday.

Since its inception, CHIP has enjoyed bi-partisan support. According to advocacy group First Focus, CHIP's 20-year history has been an overwhelming success, with the rate of uninsured children going from 14.9 percent to 4.8 percent.