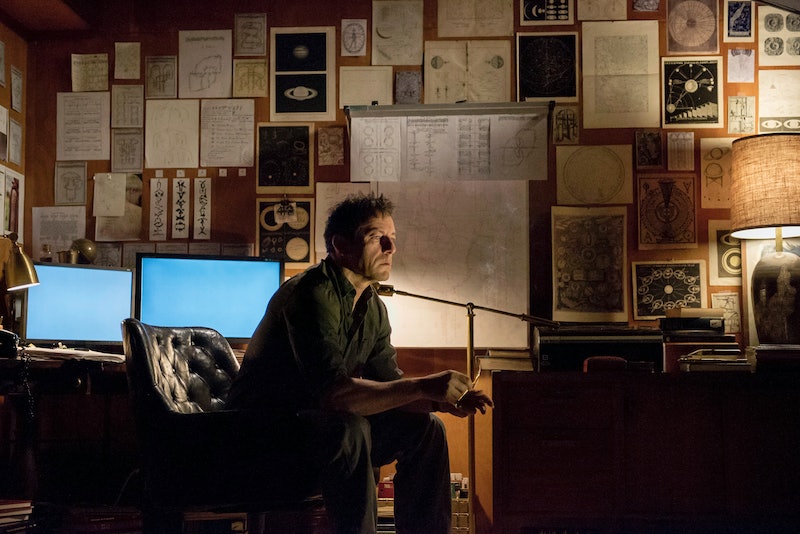 Spoilers ahead for The OA Season 2. Prairie and co. may have successfully made it into a new dimension, but they're not out of Hap's grasp. In The OA Season 2, he's a celebrated doctor named Dr. Percy, and not only does he still have his captives locked up — this time legally, at a mental health institution — he's also still experimenting, and it seems like he'll go to any lengths to keep his work a secret. As soon as Rachel caught a glimpse at Hap's secret room, he killed her.

Though Dr. Percy/Hap is a therapist by day, at night, he works for tech mogul Pierre Ruskin by investigating subjects that have died in the house on Nob Hill. He has Rachel, who in this dimension has lost her ability to communicate, assist him. So while Hap isn't drowning subjects to force them into having NDEs anymore, he is still manipulating his captives and up to something seriously nefarious.

When Prairie reunites with Rachel and Scott, they figure out a way to get Rachel to explain what Hap is doing in his lab by basically playing charades. What she describes is the teenagers that Ruskin has been luring to House on Nob Hill using Q Symphony. She also shows them a map, which Prairie takes to mean Hap is building an inter-dimensional map.

However, when Hap goes down to his lab with Rachel later in the episode, what we see is much stranger than a map. How does one even begin to start processing what's down there? The lab looks pretty nondescript, with computers, lockers, cleaning supplies, and a desk — like any kind of basement office space. Then, there are the ear trees. Apparently there is a "seed" in every brain, and the house makes it sprout. Hap pulls one out of the teenage gamer who attacked Karim and jumped out of a window.

There's also a secret room, which is locked with a keypad. "You can't handle what's behind that door," he tells Rachel in Episode 2, "and I can't trust you after today." Yet he hands Rachel a bunch of tools, leaves the door open, and taunts her about how she once sang in Carnegie Hall. What did he expect to happen?! Of course Rachel goes through the door while Hap's back is turned.

What she sees in the inner lab is not revealed. The light ripples as if there's some kind of pool or tank in there, and Rachel is frightened. "I need you to understand something," says Hap, pulling her away. "What you saw in there is one of the greatest scientific achievements," he begins... and then Rachel stabs him. The physical altercation ends with her body being taken away. Is she dead? Since someone who seems like Rachel is communicating with Buck, that's unclear, but we do know that whatever was behind that door is shocking.

What it actually is, finally revealed in Episode 8, is this: Hap has been using those ear trees to build his own forest/tree network/garden of the multiverse. It totally fits his botanical and aquatic interests. Meanwhile, in another dimension, BBA and the boys (and Angie) find a similar room.

Inside the pool is something slightly more sinister – the bodies of Scott, Michelle, and the boys from her dimension, all dead and growing flowers out of their ears. Hap says their "contribution" will allow people to jump between dimensions and see their destinations, but at what cost? In every dimension, this science experiment is seriously creepy. And now that Hap and OA have made it to yet another dimension, there's no telling how he'll up the stakes.