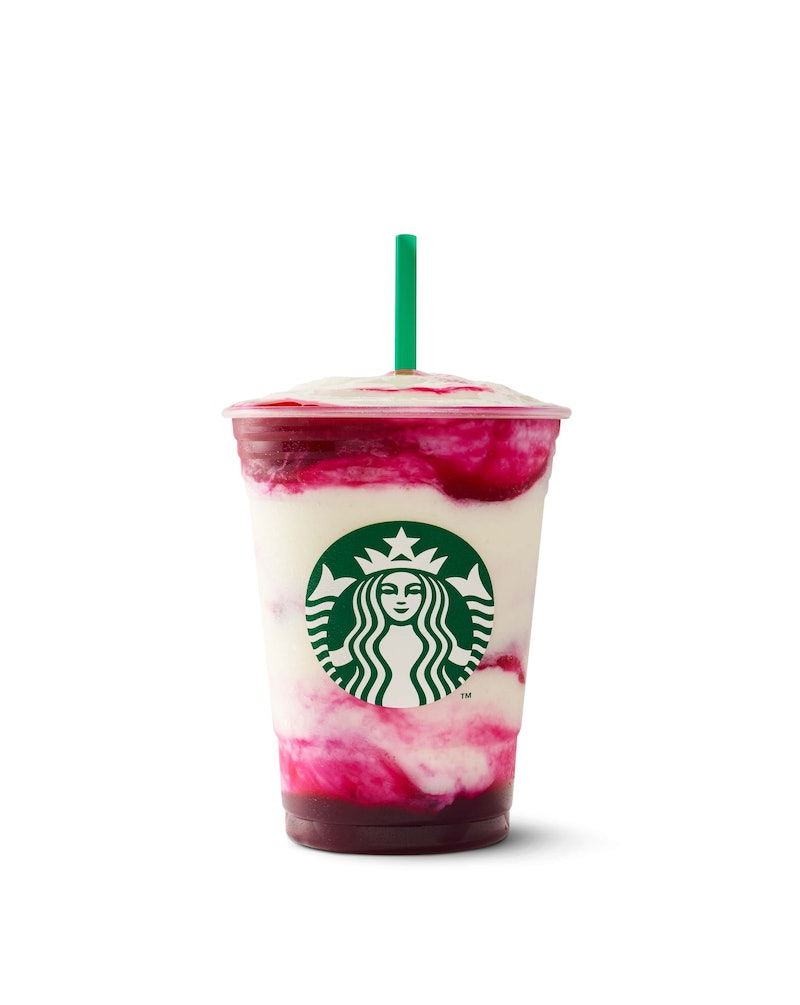 If the craze of the Unicorn Frappuccino and the Lady Gaga Cups of Kindness Collaboration are any indication, 2017 is officially the year of the Starbucks. The coffee giant announced Tuesday that it’s expanding its brightly hued drink catalog even further with two new colorful additions to its Frappuccino family: the Berry Prickly Pear and Mango Pineapple Frappuccinos. The new drinks are vibrant, bold, and bright, and totally Insta-worthy with their creamy swirls. But with so many colors in the mix, one can’t help but wonder: what’s in Starbucks' Berry Prickly Pear Frappuccino?

After the Unicorn Frappuccino’s social media takeover, colorful drinks have been the subject du jour — and Starbucks’ new Berry Prickly Pear Frappuccino takes that all to the next level be incorporating real fruit to achieve is swirly colorful look.

According to Starbucks, the drink recipe riffs on the standard cream-and-fruit combo found in many of their fruit-based Frapps, and tastes like “summer in a cup.” And as for those purple swirls? They’re packed with real fruit puree — strawberry and prickly pear, to be exact.

Per the official press release, the drink features a mango crème Frappuccino base, poured over a strawberry prickly pear fruit puree. For the uninitiated, prickly pear tastes something like a cross between bubblegum and watermelon — or as Starbucks describes it, “tropical melon and berries.” As for the drink's flavor, Starbs says the the prickly pear pairs nicely with strawberry, and features “subtle notes of hibiscus, passionfruit, and lime.” It’s topped with a final layer of fruit puree to tie it all together.

Reviews from fans have been mostly positive thus far, with many referencing the drink’s fruity taste and photo-worthy look.

The much-hyped drink made its grand appearance on menus Tuesday, Jun. 20 as part of a dual-release alongside the new Mango Pineapple Frappuccino. Both drinks will be available in Starbucks stores across the U.S. and Canada this summer while supplies last. Aka, try it soon!