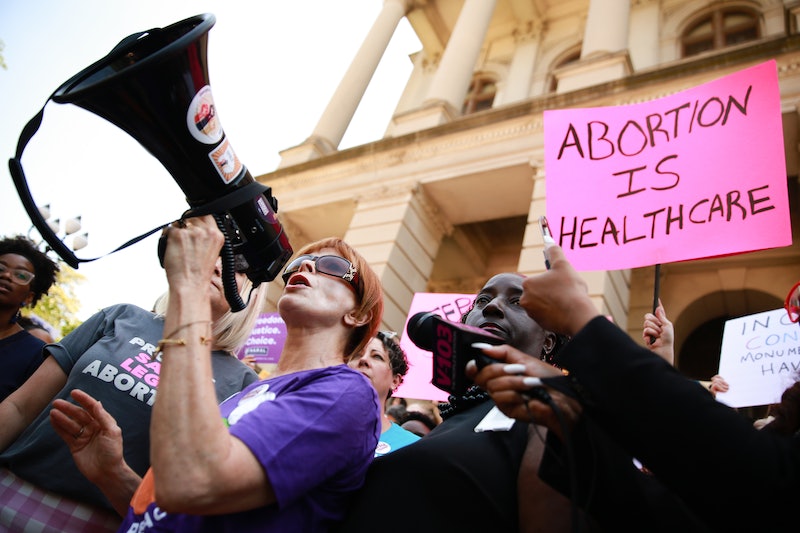 On Wednesday afternoon, Louisiana lawmakers passed a bill that bans abortion after fetal cardiac activity has been detected, NBC News reports. The legislation has passed both chambers of Congress and now heads to the desk of Gov. John Bel Edwards, who has indicated that he'll sign it. There's some nuance to the specifics of this bill, so it's worth looking at exactly what's in the Louisiana abortion ban.

On its face, the bill is similar to recent legislation in Ohio, Georgia and Mississippi. All three of those states passed laws banning abortion after fetal cardiac activity is detected — generally around six weeks or so — and that's what the Louisiana bill does as well. The Louisiana legislation provides an exception when a woman's life or "major bodily functions" would be threatened by bringing a pregnancy to term, but no exception for cases of rape or incest.

The bill also permits abortions if a pregnancy is deemed "medically futile;" in the bill's text, this is defined as a pregnancy in which the embryo or fetus "has a profound and irremediable congenital or chromosomal anomaly that is incompatible with sustaining life after birth."

What's perhaps most notable about the Louisiana bill, however, is that it won't take effect unless Mississippi's six-week ban, which is currently the subject of a lawsuit, is upheld by the courts.

Mississippi's law also bans abortion after fetal cardiac activity has been detected. On Friday, however, a federal court blocked that law from taking effect, with U.S. District Court Judge Carlton Reeves writing that the legislation "threatens immediate harm to women's rights, especially considering most women do not seek abortions services until after six weeks."

Reeves sits on the U.S. District Court for the Southern District of Mississippi. The text of the Louisiana legislation specifies that the restrictions won't take effect until the U.S. Court of Appeals for the Fifth Circuit upholds Mississippi's law, and Delta Daily News reports that Mississippi is appealing Reeves' ruling.

This means that even if Edwards signs Louisiana's ban into law, it won't actually take effect until the Mississippi legislation makes its way to the Fifth Circuit and is upheld by that court's judges. This is a very real possibility, as the Fifth Circuit has upheld controversial restrictions on abortion in the past.

There are a few more specifics to the Louisiana bill that merit note. If a doctor in the state does perform an abortion under one of the exemptions the bill provides, that physician must explain — in writing and under threat of perjury — exactly why the pregnancy itself posed a danger to the pregnant person, and how they concluded that this was the case. Additionally, any doctor who performs an abortion in violation of the law would be liable to sent to prison for up to two years and have their medical license suspended.

By imposing significant restrictions on women seeking abortions, Louisiana is following in the footsteps of Georgia, Alabama, Kentucky, Ohio, Missouri and several other Republican-controlled states that have passed similar laws in 2019. Many of those bills are tied up in litigation, and it's possible that one or more of them may eventually make its way up to the Supreme Court.