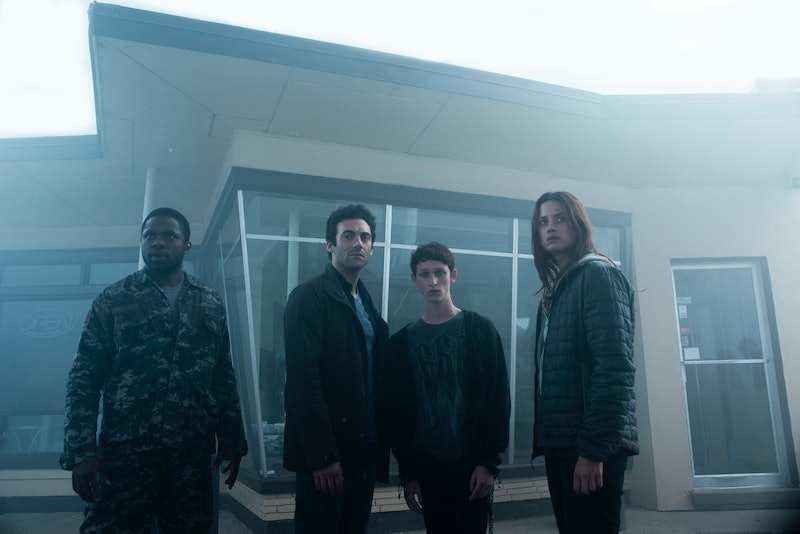 Starting June 22, Stephen King's The Mist will join the spate of book to TV adaptations making their way to screen. The show reimagines the novella's outlandish horror premise, centering around a small Maine town overcome with a thick fog harboring unknown dangers. But for viewers unfamiliar with the series' source material, what, exactly, is in the mist on The Mist may be your first burning question. (Spoilers for both Episode 1 of The Mist and the book ahead.)

In the book, the creatures can be best compared to some sort of alien or supernatural life force. When a group of people take cover in a shopping market, a bag boy steps outside to fix the store generator's exhaust vent, only to be pulled into the abyss by a swarm of tentacles. Two men witness the boy's death and try to warn their fellow refugees, but a faction of people refuse to believe them, and venture back out to find help. They're subsequently killed by a giant, unseen beast, and as the story presses on, more and more deadly monsters pop up to wreak havoc on the town.

The show seems to take a similar approach, though it's yet to reveal any hints about what the beings may look like. Within the first few moments of the premiere episode, a dog is killed after running into the mist, his organs strewn about the woods. How he died is unclear, but it was quite obviously at the hands of something capable of extreme violence and brute force.

As the fog continues to roll into town, birds, bugs, and toads flee from the mountains en masse. A local woman, Nathalie Raven (Frances Conroy), takes notice, and decides to do some research at the library. Once there, she uncovers an unnervingly prophetic report:

"Six people were found dead, presumably killed by a bear. Other animals came down the mountain in large numbers, including moose and deer and foxes. Some locals fear it's a black spring — the legend of nature turning sour, as evidenced by the frozen lake being black like a rotten tooth."

Soon enough, the mist engulfs the town, and people begin to die. A police officer is killed by a horde of beetles, a wild-eyed man runs up to Nathalie and shoots her husband, apparently thinking he's not "real," and a hostile mother's jaw is ripped off before being sucked back into the void — all without so much as a glimpse as to what's lurking within the mist.

Those who have seen Frank Darabont's 2007 film, also based on King's book, may have an idea of what to expect, but where those creatures veered pre-historic, the show seems to be taking a more animalistic route, at least based on the article Nathalie uncovered. For now, viewers, like the characters, will just have to navigate their way through The Mist in the dark.