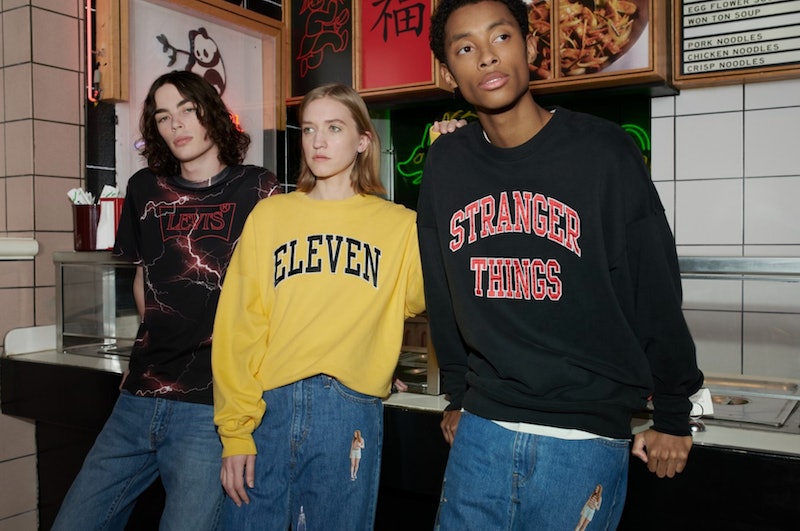 If you love Stranger Things, '80s fashions, and the '80s fashions that Stranger Things characters wear on the show, then this news is about to make your summer and your closet. There's a Stranger Things x Levi’s fashion collection on the horizon and it's so good. The special edition clothing capsule arrives on July 1 and will be sold online at the Levi's site and at Levi's retail locations. Pieces start as low as $40 and go up to $178. The collection features jeans, tees, hoodies, and more. The range lands in conjunction with Season 3 of Stranger Things, which kicks off on July 4.

Here's everything you need to know about this collection, which has a different hook than other co-branded collabs. The characters will actually be wearing some of these designs and looks on the show during the season, according to the press release received by Bustle. Shoppers will be able to purchase two in-show outfits specifically worn by Eleven and Dustin. So, yeah, you'll basically be twinning with your favorite Stranger Things characters when wearing these offerings.

Eleven's Aztec Print shirt and El Pleated jeans and Dustin's trucker cap and graphic Camp Know Where ringer tee (both pictured below) are core pieces that true fans will want to live in all summer long.

Other cool details include the Levi's logo inverted and reimagined in the Stranger Things font on several of the shirts, as well as patches on the denim pieces, red tabs, and references to the characters and the plots through graphics and phrases featured on the tops. The show's ethos playfully factors into the clothes, allowing diehard fans to proudly announce their love for Stranger Things through fashion.

The Stranger Things x Levi's collab also makes complete and total sense because denim was one of the most popular fabrics and trends of the '80s. Since the Netflix series is set during that decade, the characters regularly rock Levi’s jeans. The Stranger Things wardrobe and costume team worked directly with the Levi's design crew and dipped deep into the brand's archive of '80s designs to accurately recreate the looks, styles, and vibes of 1985 — since that's the year in which Season 3 is set. Ultimately, you can add a major dose of the '80s to your OOTD when any of these vintage-looking pieces.

And yet another cool thing about this range, as if it weren't cool enough already? The campaign images were shot at the Starcourt Mall on the Stranger Things set. The malls serves as a primary backdrop in Season 3 and serves up even more of that '80s realness.

It's best to take a moment and program a reminder in your phone's calendar to shop the Stranger Things x Levi's collection on July 1. Forget all those Fourth of July holiday sales and get your Stranger Things on — literally!

The Levi's range is just one of many Stranger Things clothing collections dropping ahead of the Season 3 bow. There's a Stranger Things x H&M summer and swim range. Meanwhile, the Stranger Things x Nike assortment features several pairs of iconic sneakers, along with sweatshirts and tees. All of these fashion collabs nod to everyday life in Hawkins, Indiana, and will make the wearer feel as though they are a lifelong resident.

It'll be 1985 in your closet and on your person, thanks to the super authentic Stranger Things x Levi's collection.