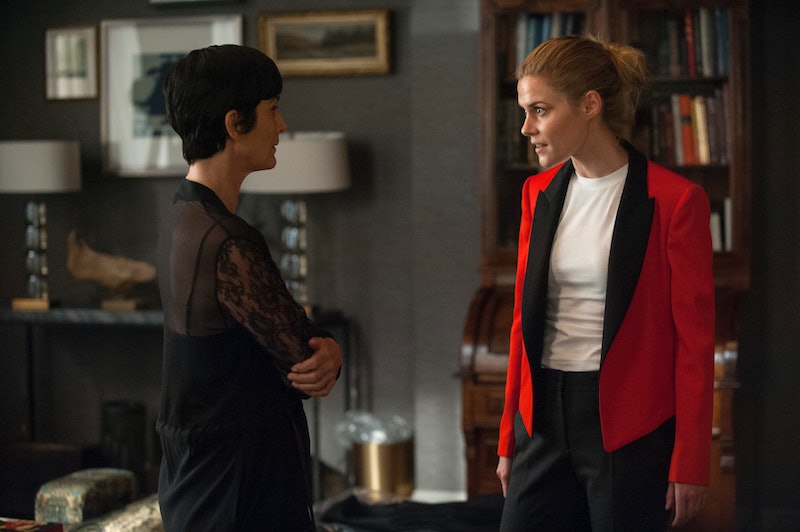 Spoilers ahead for Jessica Jones Season 2. In the second season of Jessica Jones, we get to learn a little more about Trish Walker, specifically her life long struggle with addiction. This time, her addiction and her curiosity about superpowers combined to do some real damage. What's in Trish's inhaler on Jessica Jones? Will Simpson may be gone, but his enhancements are still causing mayhem.

In Season 1, Simpson was just a cop with a mysterious military past. He became obsessed with finding Kilgrave, and when Jessica's methods were coming up empty he returned to the military program. Like so many in the Marvel universe, they were trying to create super soldiers — but the combat enhancers Will took in pill form had some nasty side effects. Basically, they turned him into a murderous maniac. Not great!

The pills had a specific regimen to keep Will in control. One red pill increased adrenaline. Two white pills kept everything even, and a blue pill brings you back down. Simpson took an additional red and lost it. Trish had a taste of that power after taking a red pill, but collapsed and needed to be resuscitated after inhabiting all that power. What exactly do they do? Used correctly, the pills gave Will and Trish increased strength, increased stamina, suppressed pain, and healing.

At the beginning of Season 2, Will resurfaces, occasionally taking a hit from an inhaler. When Trish collects his cache of weapons and devices after he is found dead, she starts inhaling the enhancement as well. "This isn't like last time," she gasps after waking up 26 hours later and vomiting.

Trish soon becomes addicted to the inhaler, and even offers some of the raw power to Malcolm. It doesn't give her the ability to scale walls or fly, or anything, just a little strength and power boost. It isn't until she runs out that she gets clean, and then turns to Dr. Karl to try and give her powers instead.

But first, in Episode 10, Trish gets the inhaler and its contents examined. "We ran several tests on the residue," a technician tells her, "but couldn't identify all its components, including an organic plant-based element. Which, of course, means we can't replicate the drug." Later, she says that "the few chemicals we could ID contain toxins too dangerous for any human being too ingest" and would cause a multitude of health issues if one did. It's not clear what that plant-based element is just yet, but it seems likely that this won't be the last we hear of it.

It seems like this inhaler is made of the same drug that Will was taking in these pills. He must have found some way to either change its form or recreate it somehow while in hiding. Jessica Jones never explained in Season 1 exactly what the chemical makeup of the pill was either — but it's probably not vibranium, the serum that made Captain America, Pym particles, or anything else from Marvel comics. Just an imitation.

What's important is how it affects Trish's journey and her relationship with Jessica. "We've always seen Trish and Jessica stand by each other," said actor Rachael Taylor in an interview with PopSugar, "and what's exciting about Season 2 — and what's very, very dark ‚ is that idea wobbles for Trish. She so badly wants to be more than what she is, that she's prepared to double-cross Jessica in some moments or certainly push her in a way that's questionable."

She also talked about how Trish is not always a good guy in Season 2, and this inhaler is a bit part of it. She betrays her family, takes some some inadvisable career risks including quitting her job, and even starts to hurt people in her path. She's not downright evil, but her intentions are muddled.

To oversimplify it, Trish wants to be special. Her mother taught her to seek value by chasing fame. Her job as a journalist isn't as serious or important as she wants it to be. Her sister is a freakin' superhero. It totally makes sense that she would go to extreme lengths to become more than human. However, as Whizzer says in an early episode, "with great power comes great mental illness" — and also great consequences. Trish can and will become a hero one day. Just not with this combat inhaler. It's way too dangerous and not fit for a Hellcat.