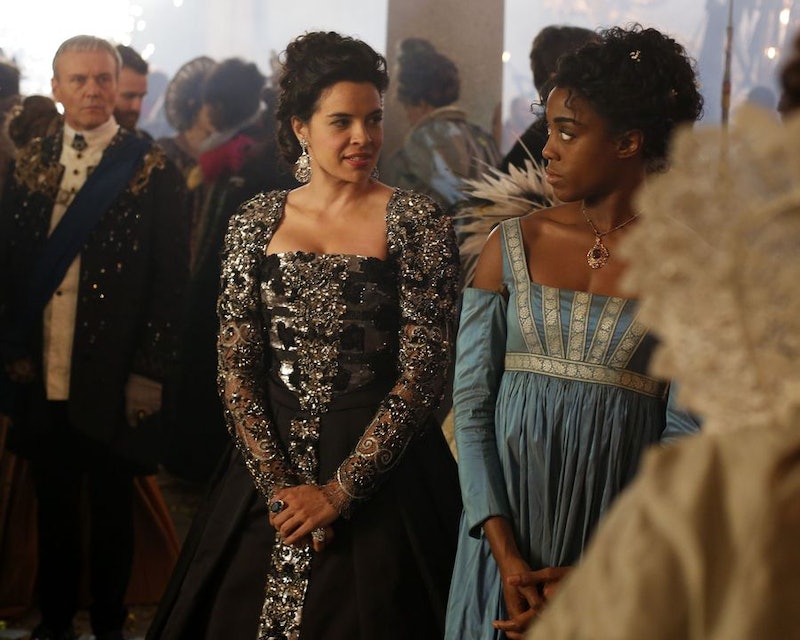 Every good love story needs someone to come in and mess it all up, and in Still Star-Crossed, that person seems to be Lady Capulet. Right from the onset, we learn that she made her nieces servants in her household after their parents died, she doesn’t like them at all (obviously) because she is jealous, and she has a whole bunch of evil hiding underneath all of those skirts. This is not a complicated character here — at least, not yet. But what's Lady Capulet’s plan on Still Star-Crossed? By the time the pilot ends, and I’m not sure what more she can do to improve her station.

The first episode of Still Star-Crossed recaps the final third of William Shakespeare's Romeo & Juliet before launching into a new plot. So audiences see another version of Romeo and Juliet getting married, killing their cousins, drinking poison, and so on. Paris, the count that was betrothed to Juliet before she ran off with Romeo to get married, is also present. When Romeo comes to Juliet’s grave to say his goodbyes, he finds Paris there, who is all, "Why are you visiting my girl?" And Romeo is like, "Nah, she was mine though," And they fight. Ultimately, Romeo stabs and seriously wounds Paris, and that's it for him... until Lady Capulet is shown taking care of Paris in some deep, dark basement.

Lady Capulet stood to win a lot if her daughter married Paris, but now that her daughter is dead, I don’t know what benefit there is to nursing Paris back to health. The woman is mad for power — that is clear — and my guess is that she’ll try and marry off her niece Livia to bring her own station up. But now that the Montagues and Capulets are joined by marriage again — Benvolio Montague and Rosaline Capulet, Lady Capulet’s other niece, are being forced into a wedding they don’t want — what’s the point? The money combines, the power combines, the fighting stops. I’m looking at a win-win situation here.

It could also be that Lady Capulet is trying just to get rid of her nieces, who, as previously mentioned, she hates. When their parents died, Lady Capulet decided to use them as servants and not treat them as relatives, mostly, as Rosaline says, because Lady Capulet was jealous of Rosaline and Livia’s mother and really actually loved their father instead of her own husband. Way harsh, but it could be true, since Lady Capulet looked like she wanted to slug Rosaline when she said it.

From the tower I sit in, Lady Capulet wants more of everything, and she’s going to use Paris to get it. She has the who, but after the May 29 premiere, I'm still not really sure on the why.