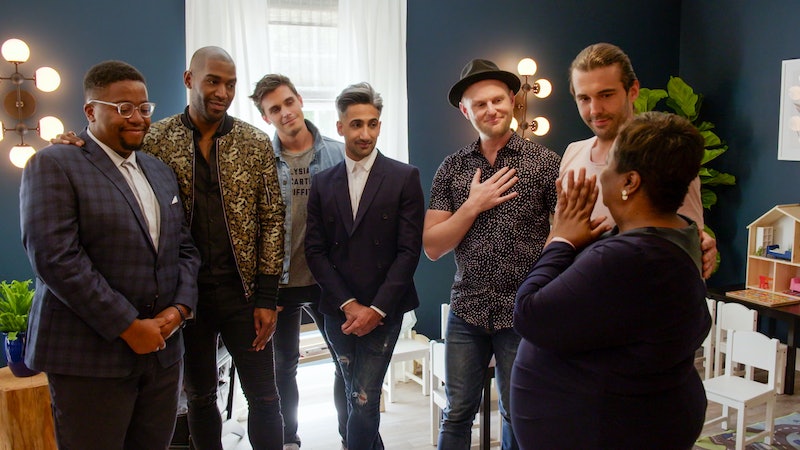 Spoilers for the Season 2 premiere of Queer Eye ahead. The first season of Queer Eye was surprisingly emotional, so it's not surprise that the first episode back in Season 2 has everyone crying. Tammye and her son Myles made a profound impact on the Fab Five and each other during the filming process. What is Myles doing after Queer Eye? Not chasing reality star fame, he's living his best life in Georgia... and his line of work may actually surprise you.

While his mother is the "hero" getting made over in the episode, Myles is presented as being in a rut. His messy room is a metaphor for his messy life... you get the picture. He recently moved back home and he's hesitant to get back into choir and church events for fear of persecution due to his sexuality. While Myles had already come out as gay to his family, he wasn't 100 percent accepted there or in his community. Much of the episode focuses on Tammye's own change of heart and how she's embracing and supporting her son.

However, a brief glance on social media and Myles' Instagram in particular shows some layers to Tammye's son that show his work and personal lives aren't exactly at a standstill.

For one thing, he's spending a lot of time with his family. The photo below looks like it may have been after Tammye's makeover — if that's wrong, please ask Tan to forgive me. The glasses Myles is sporting also match the ones he has on in the episode.

Looking back, Myles posted a selfie from his mom's new bathroom and a photo of him in his fancy Homecoming outfit in September 2017, so the Fab Five had to have visited before then. And this isn't Game of Thrones or even The Bachelor — participants can post "spoilers" on social media really without anyone catching wise.

So, what else has Tammye's son been up to since September? Myles' Instagram bio says #FutureMortician and that appears to be no joke. According to social media, he became certified in cremation operation in 2016 and then graduated last Spring from Gupton Jones College of Funeral Services in Decatur, Georgia.

According to his Facebook profile, Myles is working now as a Funeral Director/Embalmer Apprentice at Tara Garden Chapel in Jonesboro, Georgia. Tara Garden Chapel is about an hour's drive from the town of Gay where his mother lives, and a little closer to Atlanta.

While in school he, umm, did a "restorative art project" which involved creating a model of a dead Steve Harvey? That's quite a choice. Apparently, this is something mortuary students do to practice making dead bodies look their best for funerals.

Myles is also familiar with the infamous millennial hustle and worked at Starbucks last year, just a few months before his mother's Queer Eye episode filmed. By March of 2018, Myles was traveling with friends, going to corporate events with his sister, and loving his job.

Did Myles really join that Atlanta church choir? Does he still live at home? That's still not clear from his social media. Maybe he'll post an update for Queer Eye fans now that the episode has gone live, but on the other hand, some things are better left to the ether. We don't need to know everything about his relatively normal-seeming life.

Also, think about this... the first season of Queer Eye hadn't even aired yet on Netflix when Myles' family took them into their home and community. They had no idea how popular and heartwarming this show was going to become. Tom, the "hero" of first episode of Queer Eye Season 1, certainly became an internet sensation. Maybe Tammye and Myles will be next.