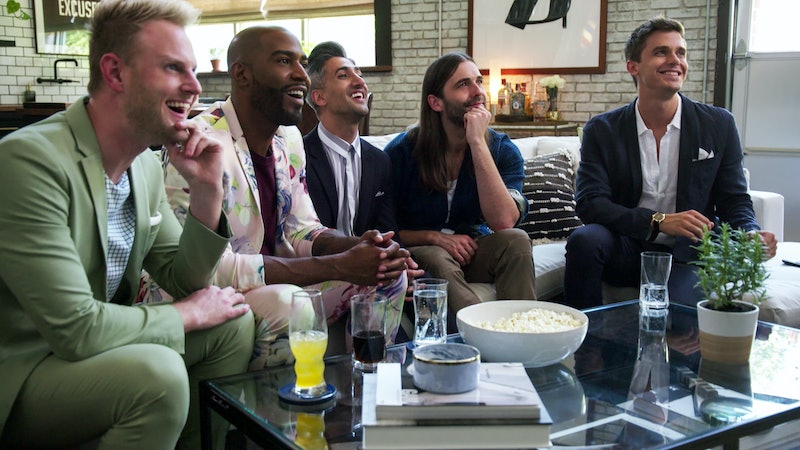 Light spoilers ahead for Season 2 of Queer Eye. The foundation of the original Queer Eye For The Straight Guy was that a gay man could solve all your problems. From 2003 to 2007, five of the cuddliest, most non-threatening gay men possible flittered into a hapless straight man’s life, ready to serve. The original Fab Five were nearly identical Ken dolls who left their identities at the door of whatever pigsty apartment they were tasked with fixing. Only the tamest of sexual innuendos were allowed; no talk of boyfriends, of politics, of how the men they are helping sometimes represented the very people that kept queer people unmarried, unemployed, and fearing for their lives was included.

For context, 2003 was the year the body of Richie Phillips was found in a suitcase in Rough River Lake. It was the year Glen Kopitske was stabbed to death by an Eagle Scout. It was the year Gwen Araujo was brutally beaten and strangled by three men because she was transgender. It was the year 15-year-old Sakia Gunn was murdered at a bus stop when she said she was a lesbian. Given that, it can almost be forgiven how intent the original Queer Eye was on showing how harmless its gay men are.

But Netflix’s remake of Queer Eye has altered the formula somewhat. The new Fab Five are all still Ken dolls, with matching trim waists and conventionally handsome features. But there’s only three white guys compared to the original recipe’s four, and their identities are allowed to inform the show. Fashion expert Tan France, a British-born Muslim of Pakistani descent who's married to a man (take that, 2003!), occasionally brings up the various intersections of his identity in between getting slobs to wear collared shirts; culture expert Karamo Brown’s wealth of life experience comes not just from being black and gay in America, but also from raising two boys.

By showing the blind spots of the queer identity, Queer Eye paints a clearer, more accurate picture of what it means to be gay in today’s society.

But allowing the Fab Five to be real human beings means that they have limitations. The cartoons of Queer Eye past were magical creatures who could do anything. By showing the blind spots of the queer identity, the areas where we were denied experiences due to our sexuality, Queer Eye paints a clearer, more accurate picture of what it means to be gay in today’s society.

Some of those limitations are forced upon us. The first episode of Queer Eye Season 2 focuses on Tammye, a woman with considerable ties to her local church. Not all of the Fab Five can relate. Bobby Berk is perhaps the most magical of the five, responsible for turning the barest of dwellings into livable spaces. But this whole assignment gives him pause, as he brings up difficult memories of being kicked out of the church he loved as a boy. He’s not alone — Tammye's son is also gay, and also feels left out of the religious community that was the center of his life. Everyone comes together in time for a happy ending, but there’s an uncomfortable specter haunting the whole episode. When queer people are vilified and excluded from the churches of their home community, they are also excluded from the communities for which the church is the center. Sure, Tammye’s son can sing with a choir again, but it’s with OurSong, the Atlanta Gay and Lesbian Chorus, several miles away from his mom’s house.

Not all the gaps in our experience are created by an intolerant society. The second season also sees the Fab Five sprucing up a trans man, Skyler. France, who had stayed politely amused in the background of Tammye’s episode, takes up most of the screen time here, and not just because Skyler is a 30-year-old who dresses like a teenage skate rat. Tan admits to never having met a trans person before, and having problematic opinions about trans peoples’ need to alter their bodies.

“I used to think, why do you need to get surgery to feel like a man?” France admits. Considering how much France has personally invested in the transformative ability of clothes, this opinion is understandable, if not forgivable. Body dysphoria can be debilitating for trans people. While not every trans person can afford surgery — Skyler had to raise money for his, and even with that ended up with a bill of thousands of dollars due to complications — and not every one wants it, there’s no denying that for some people, it is utterly necessary.

What turns France around is footage of Skyler’s top surgery, and the intense catharsis he experiences when he looks down and no longer sees breasts. Including the surgery footage feels like an invasion of Skyler’s privacy, another example of how the media parades trans bodies for the wonder and disgust of cis audiences. But if it changes some minds like France’s, maybe it’s worth it. Only Skyler can be the judge of that, and he presumably gave Netflix permission to include the footage.

This version of Queer Eye deems it more important for France to be flesh-and-blood gay man than it is for him to be an expert on all aspects of the queer experience.

France’s confession to Skyler about his distance from the trans and queer community carries a familiar refrain. He admits that part of the reason he never got more involved was because he didn't want to appear “too gay” to potential clients and businesses. This conversation has nothing to do with picking out a suit for Skyler, but it’s perhaps the most important scene in the episode. Displaying France’s vulnerability in this moment is an interesting tact for a reality show. It makes it clear that this version of Queer Eye deems it more important for France to be flesh-and-blood gay man than it is for him to be an expert on all aspects of the queer experience.

While I give props to the new Queer Eye for showing that its experts don’t know everything, there’s one blind spot that they seem unwilling to notice. While making over large man Leo, the Fab Five repeatedly make jokes about his weight and focus on things being flattering or slimming. The queer community, gay men in particular, have their own problems with being fat-phobic, and it’s disappointing to see those same attitudes at play in the episode. A handful of gym-ready men focusing on making an overweight man look skinnier? In the words of Jonathan Van Ness, grooming (and camp) expert, it’s not a good look.

The Queer Eye reboot stands far above its predecessor in its willingness to show that being queer is not a magic power, but there's still room for improvement. Featuring another trans person, a queer woman, or even just an unapologetically fat guy in Season 3 would be a step in the right direction. But for all its faults, I enjoy the new Queer Eye. We still live in a country where people are being murdered in the streets for being gay — the massacre at the Pulse nightclub in Orlando was only two years ago, and in 2017 LGBTQ murders almost doubled, according to NBC. I’ll take all the representations of queer people as human beings I can get.