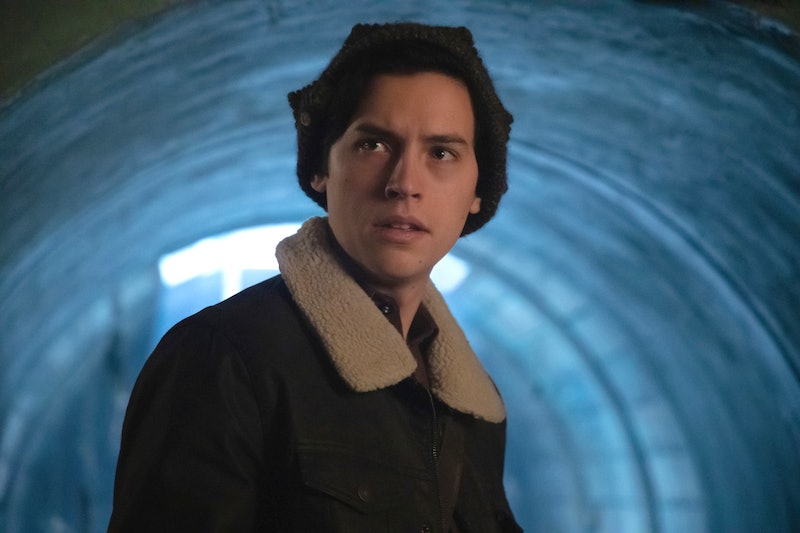 Spoilers ahead for Episode 3 of Riverdale Season 4. With the Gargoyle King mystery solved and Edgar from The Farm finished off, the Riverdale gang needed a new mystery to solve in Season 4, and hoo boy, did the Oct. 23 episode deliver. In the final moments of the show, Jughead received a strange videotape at his doorstep — which, knowing Riverdale, means he and Betty have found their next case.

Because the tape didn't include any kind of label or message, it's not clear yet what might be on it. When he got the tape, Jughead did say "famous last words," but it seems like he was referring to Betty having just proclaimed, "I'm just happy that this nightmare is finally over," rather than suggesting the tape contains people's last words (although, you never know.) It's also not clear yet who left the tape, but it doesn't seem like Jughead will be the only recipient in Riverdale.

The synopsis for the next episode (which is also the Halloween episode) reads, "When ominous videotapes begin appearing on doorsteps across Riverdale, widespread fear quickly returns to the town. At Stonewall Prep, Jughead learns about a series of mysterious disappearances that have occurred to former students at the school."

Perhaps the tapes are connected to those disappearances, and serve as quasi-ransom notes with details about how to ensure the missing people are returned alive and well. Or maybe the tapes have people's secrets on them, and are being used as blackmail if they don't perform a set task? It really could be anything. Fortunately, there are more clues about who might be delivering the tapes than what's on them.

Judghead's Stonewall Prep classmate Brett is the definition of suspicious. He seems to be more inclined to psychological warfare than physical violence, so it would be very up his ally to torment Jughead and his friends with mysterious videotapes. He already exposed the truth about Moose's father; there's no telling what other secrets he may be willing to reveal.

As Bustle writer Leah Thomas pointed out, Brett's name is also a reference to American Psycho, which had its own videotape storyline. While the Riverdale character is named Brett Weston Wallis, the author of the American Psycho book is named Bret Easton Ellis. And in the 2000 movie based on the novel, one of Patrick Bateman's excuses for leaving situations is that he has to "return some videotapes."

It's also worth noting that Riverdale creator Roberto Aguirre-Sacasa, adapted American Psycho into a 2016 Broadway musical, so these references are not likely to be coincidences. Therefore, it's pretty likely that Brett is behind the videotapes on Riverdale. But he's not the only possible culprit.

Right before the tape showed up at Jughead's door, he was asking Betty if she felt that they could really trust Charles Smith. He's both Betty and Jughead's brother, born to teenage Alice Cooper and FP Jones before being left in foster care. Charles returned to Riverdale to investigate the Farm, and he struck up a close working relationship with Betty on the investigation. But someone has already impersonated Alice's first child before (remember Chic?) so it's possible someone could be doing so again. Maybe Charles isn't the stand-up FBI agent he's presenting himself to be.

Edgar may be dead, but that doesn't necessarily mean the cult has dissolved. Maybe a follower or two wants to restart the Farm and is going to brainwash people via videotapes. Maybe this was a planned tape delivery that Edgar scheduled before his death. The Farm did have a personal pizza delivery man; maybe that person is also delivering the tapes.

In any case, the tape mystery may be solved pretty quickly. It seems that it's just a gimmick for the Halloween episode, because there's no mention of any tapes in the synopsis for the Nov. 6 episode, which reads, "Caught between Hiram and Hermione's double trial, Veronica grapples with what the future holds for her family. Archie finds himself the unexpected target of the town's local businesses. Betty and Kevin join the Junior FBI Training Program, and Jughead learns some surprising information about his family history."

Unless Jughead learns that information about his family from the tape, the show may reveal what's on them and who's behind them all in the Oct. 30 episode. The larger mystery at work still appears to be Jughead's disappearance. But at least the Halloween episode will be extra spooky with this new videotape development.