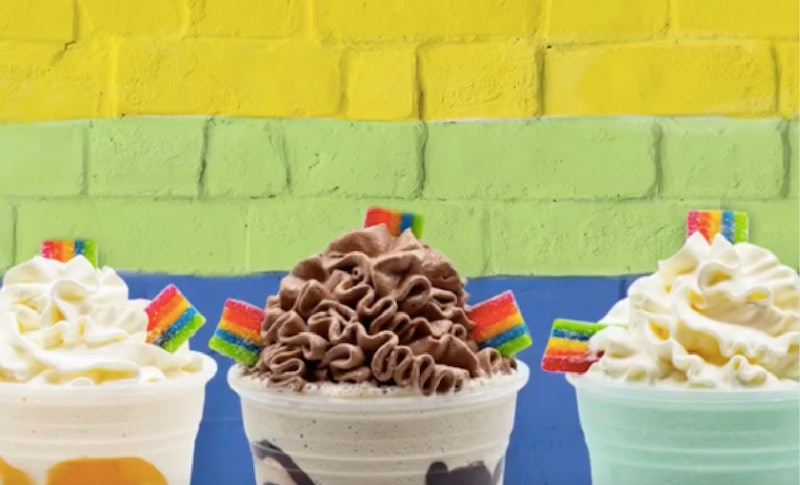 If you’re looking for an excuse to indulge in sweet treats, St. Patrick’s Day is right around the corner. I know St. Pat’s is less a “cookies and cakes” day and more a “beer and more beer” day, but Wawa has a St. Patrick’s Day secret menu that is going to make you want to put your green beer down. (If it’s any consolation, at least one of their secret menu items is also green. Also, it’s probably less likely to stain your mouth than whatever Miller Lite spiked with green food coloring you were sipping on.)

Wawa shared a photo of one of the secret menu drinks on Twitter with the caption, “Secrets are Mint to be shared.” (Puns are now St. Pat’s canon.) On Instagram, Wawa posted a video showing two more of the St. Patrick’s Day drinks, all three topped with whipped cream and rainbow candy pieces. The video also explains how to access the not-so-secret menu when you order at one of their locations. You’ll just need to use one of Wawa’s touch-screen kiosks and press the four-leaf clover, which you’ll see in the bottom left corner of the screen. If only all secrets were easily accessible via store kiosks.

According to Food & Wine, the St. Patrick’s Day items include three different smoothies.

Okay, so “smoothie” seems like a misnomer. These are definitely more in the milkshake family. I do admire the confidence with which Wawa is willing to call sugar and cream a “smoothie.” Perhaps I will apply it to the rest of my life. (i.e. I’m eating a sprinkle smoothie, not Funfetti frosting from a can.)

The three smoothies are available at all Wawa locations, but only for a limited time: until a St. Patrick’s Day (Sunday, March 17).

If “Wawa” sounds like a baby asking for water and not a grab-and-go store known for its hoagies, welcome. You are probably not on the east coast. There is St. Patrick’s Day hope yet if you aren’t near a Wawa location and want to indulge in green treats.

Perhaps you’ve heard of a little local bistro called McDonald’s? The fast-food chain is known for their Shamrock Shake, which is only available around St. Patrick’s Day. It’s a minty milkshake, made with vanilla soft serve, that McDonald’s knows better than to call a “smoothie.” It’s tinted green and comes topped with whipped cream and a cherry. It kind of looks like what an alien would try to serve a human as deserve, and it is delicious.

If you want to go absolutely buck wild or don’t have the patience to alternate between sipping Jameson and sipping on a shake, you could make a boozy Shamrock Shake. Mint-flavored vodka exists because of course it does. Any brand of birthday cake vodka would also likely pair well with a milkshake. But please, milkshake responsibly.

It’s impossible to say “secret menu” without awakening the Starbucks gremlin in all of us. While it doesn’t appear that Starbucks has any St. Paddy’s-specific drinks, you have plenty of options if you just want to partake in a green drink. The Matcha Green Tea Frappuccino is green, topped with whipped cream, and has the earthy flavor that I would imagine actual shamrocks have. So festive! Happy St. Patrick’s Day!