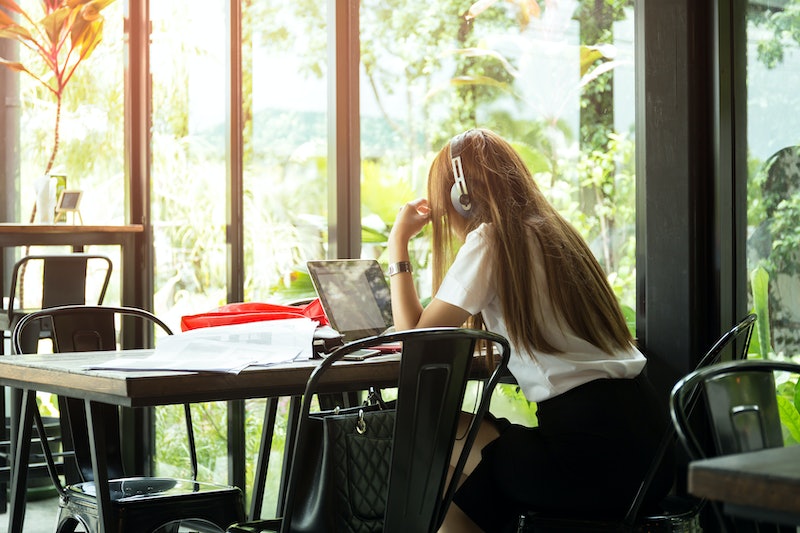 Focusing doesn't come naturally to many of us. Whether you're studying for exams, working on a huge presentation, or are trying to pick up a focus-heavy hobby, it probably couldn't hurt to get an extra focus boost without changing your habits too much. And if you're the kind of person to likes to have music on in the background at all times, you may be wondering whether your chosen soundtrack is helping or hindering your productivity. The good news: a backdrop of sound seems to be good for your attention. The bad: what you choose for your playlist has a real effect on how much you get done. The best music to study or do work to won't make your attention wander or take you out of your most productive phase. If you're all about that your playlists, listen up: you can hone your results by tweaking your tunes.

Human brains are seriously responsive to music, whether we're conscious of it or not. A study in 2016, for instance, found that brains pick up on the rhythm of music without any conscious attention; you may be completely distracted by something else, but your toes may still be tapping to the beat of the song in your headphones. But sorting out what helps and what hinders your attention as we try to focus is a complex area of research, and the results aren't necessarily what you'd expect.

Part of the answer, it seems, depends on what you want the soundtrack to do. If you're simply drowning out ambient noise in an office environment, a noisy shared apartment or a cafe, then research suggests that music that contains "nature sounds" may be your best bet. A study from 2015 found that "sound-masking" in open-plan offices, which are often hives of noise, works best when it contains some sounds from nature, possibly because the brain is tricked into believing it's outside and tunes out the natural distractions. If your favorite folk album contains samples of birdsong, this is a good time to put it in your headphones. But you want to know what kind of music will make you more focused, not just allow you to focus full stop. And that's where things get interesting.

Researchers have discovered that if you're trying to get a lot done, now is not the time to put on that new chart-topping bop you haven't heard yet, or a mix from your ex. Anything that contains an element that might distract you — emotion, novelty, interest or distaste — is a bad idea. The human brain has many different reactions to stimuli, and it's not going to find it easy to focus if you're providing it with music that prompts a host of feelings or thoughts.

Novelty is a particular issue: the human brain loves new stimuli and gets a hit of dopamine from novel experiences, so it will break off whatever it's doing to pay attention to new songs. New songs will also prompt one of the brain's most interesting responses to music: we start to pattern-predict. If a piece of music does something in chord progressions or rhythm that seems "untidy" or doesn't fit with our expectations, our brains immediately notice the "pattern" has gone wrong and pay attention to it. This is why so many "study playlists" include pieces like Pachelbel's Canon in D; they follow predictable rhythms that don't change.

Too many unfamiliar lyrics are a poor choice, too, according to researchers, because the brain will attempt to follow along and decipher the words, even if it's investing a huge portion of its conscious attention elsewhere. And emotionally resonant or memory-filled music is also distracting; our moods really do lift or fall depending on the emotions we've invested in the music we're hearing, and if it's something that has a lot of meaning for us, it's unwise to have it in the background as we're doing something else.

But that doesn't mean you should stay away from the familiar. The best bet for upping your productivity, according to research by the British Psychological Society in 2012, is a playlist of old favorites, regardless of their genre. They assessed athletes and their performances following a dose of their favorite music, and found that it increased their endurance and exertion in training sessions. While the music blocked out other sources of auditory distraction and stress, it also didn't provide any internal distractions itself: the athletes knew every word and beat, so their brains didn't devote any conscious attention to the music, instead using it to channel their focus "into the zone". Notably, the type of the music was completely irrelevant; whether it was classical or ska, the athletes responded to its familiarity and emotional comfort with greater efficiency and performance.

So if you're concocting a playlist for an intense piece of work, stick to predictable songs you know, but don't particularly care about. Save the new music playlist for your downtime.