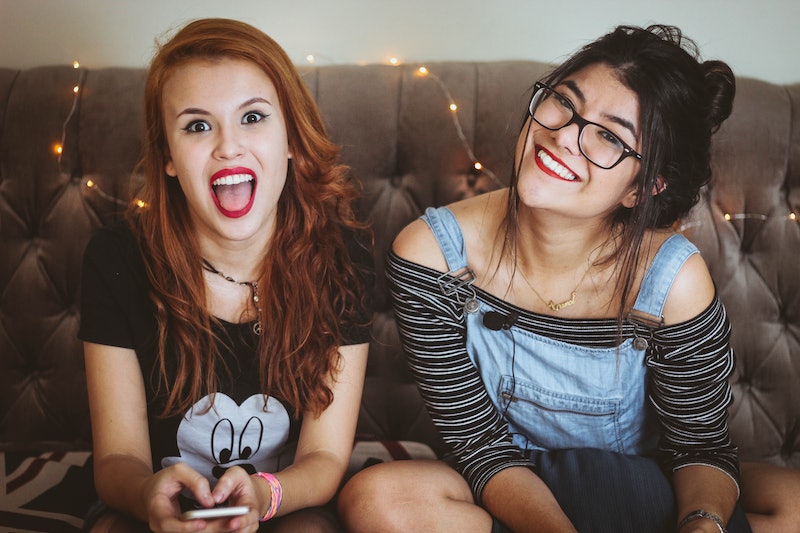 There's a lot to consider before moving in with someone. Whether it's your partner, your friend, or a stranger you met on Craigslist who you're desperately hoping doesn't have secret plans to collect your hair and make a doll, it's important to go over your living arrangements together beforehand, like what your quiet hours are, who should clean what, and perhaps most importantly, how you'll split rent with your roommate.

Ideally, all rooms would be the same size, have the same amenities, and you would all use the same amount of utilities, so you could split rent evenly. But it rarely works out that way. Maybe one person has an en-suite bathroom, or another person has no window, or someone is living in a closet under the stairs, Harry Potter-style. With all of these different considerations, how you split your rent often needs to be adjusted accordingly. But is there one magical formula that can tell you how to divide your costs? According to Ashley Feinstein Gerstley, founder of the Fiscal Femme, the magic formula is whatever works best for you.

"The best way to split rent with a roommate is really any way where you both are happy and feel the split is fair," Gerstley told Bustle. "There is no right or wrong way to do it. If you've lived with roommates before, don't assume how you split the rent and bills before is going to work in this new situation."

You can also use what Forbes calls a "perks" approach, and assign a cost to each amenity you get in your room that others don't, like a big closet, extra windows, or a balcony. For example: your roommate pays $50 extra a month because her room has an en-suite bathroom.

If you would really like to dive in the deep end mathematically, you could try "Sperna's Lemma," a mathematical theorem for splitting rent which takes into consideration personal preferences, and different people's "assumption of value." Does it sound complicated? It is. The paper presenting the theorem has sentences like: "A triangulation of an n-simplex S is a collection of (distinct) smaller n-simplices," and "A k-face of an n-simplex is the k-simplex formed by the span ofany subset of k + 1 vertices." Before you start having stress dreams about high school math tests though, don't worry — The New York Times made a rent division calculator that does the math for you.

There are a ton of ways to split rent, but as Feinstein Gerstley says, the key is to find what works for you and your roommate.

"You can get as in-depth or simple as works for you two," she says. "My roomie and I created an excel model that included the value of shared space and each of our rooms and we sent it back and forth and had fun with it. I've also had clients who were happy with a split plus or minus a couple hundred dollars because that 'felt right.' Both worked great!"

What matters most at the end of the day isn't so much how you choose to divide the rent, it's that everyone is able to communicate and negotiate what they see as a fair deal.

"The most important part is that you speak up if something doesn't sit well with you and share your thought process behind the rent split," Gerstley says.

And once you do have an agreement, it's a good idea to get it in writing so there's no confusion in the future.

Now that that's settled, if your Craigslist roommate is in fact collecting your hair to make a doll, I don't know how to help you.