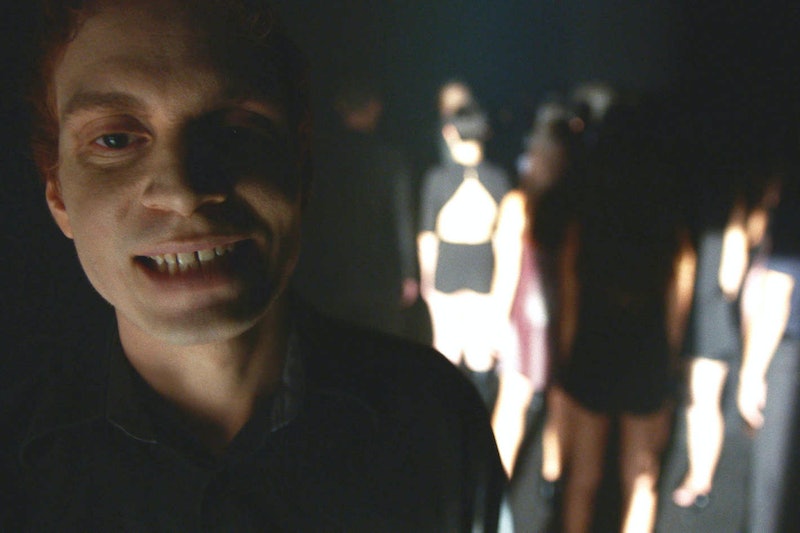 Viewers have seen and heard a lot of disturbing things on FX's X-Men-adjacent superhero series, but the sound of a room full of catatonic people all loudly clacking their teeth has got to be one of the most unsettling. What is the Catalyst on Legion? That's the name the team at Division III has given to the psychological infection that the Shadow King is seemingly spreading among the population as he evades capture and searches for his corporeal body. But it's still unclear what it actually does other than make people look like they're really, really cold.

There doesn't appear to be any cure for the disease yet, as Division III has taken to rounding up the infected and quarantining them deep within their building, in a dark room filled with the sound of clacking enamel. But while the team seems to assume the infected are beyond help until they manage to find and stop the Shadow King, perhaps they should be more concerned about what those supposedly "catatonic" minds are up to in the meantime. Are they really just sitting idle? Or has the Shadow King somehow put all of that brainpower to use in his hunt for his physical form?

Only one episode in, and Season 2 has already been filled with hexagonal imagery: decorating the Division III building, in the shape of Syd's compass necklace, and elsewhere. These recurring hexagons are reminiscent of the structure of a beehive… so could the motif be pointing towards some sort of hive mind being relevant to the plot of this season?

If the Shadow King has somehow induced these infected people to psychically aid in his search for his body, then Division III could be playing right into his hand by quarantining them all in the same space. If the infected are serving as a hive mind for Amahl Farouk, then confining them all together could be boosting their signal like a supercomputer — or like the immersion tank Cary built to boost David's own signal in the Season 2 premiere.

It could even turn out that their search method is less psychic and more… auditory. If Farouk suspects for some reason that his body is being held within Division III itself, could the chattering teeth be some kind of mass echolocation being used to track its location? OK, so that might be a bit of a stretch. But would it be the weirdest thing to ever happen on Legion?

If the victims of the Shadow King's infection aren't helping him search for his body, then what else could be going on with them? I joked before that the teeth chattering made it seem like they were cold — but could that actually be a clue into their mental state? In Season 1, when Oliver Bird was trapped in the astral plane, he was depicted as living in a giant ice cube. Ice is cold, cold makes people's teeth chatter… could the show be hinting that the people infected with the Catalyst are now stranded in the astral plane?

If so, did the Shadow King really put them there, as Division III assumes? Or could their "infection" actually have been caused by David, whether intentionally or not? Could the psychic power of his epic dance battles with Farouk be sending the minds of those who happen to be in the vicinity spinning into the astral plane, to become stranded forever? They battled in the nightclub where some of the infected were found. Could the library and other epicenters of the Catalyst also be sites where David did battle with the Shadow King?

For now, the teeth chattering is merely an unsettling detail that adds to the creepiness and weirdness of Season 2 (which is already so much creepier and weirder than Season 1, if that's possible). But as more is revealed about the Shadow King and the Catalyst, this detail could likely have huge ramifications for the show… and for the future of humanity, if future-Syd's dire warnings are any indication.