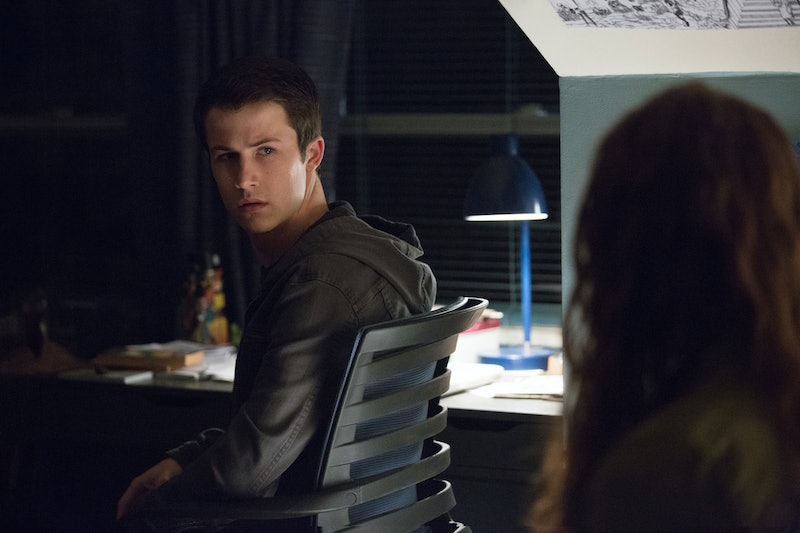 MAJOR SPOILERS for 13 Reasons Why Season 2 ahead. 13 Reasons Why Season 1 started off as a show detailing how micro-aggressions and bullying can trigger depression and lead someone to consider suicide, but later revealed a larger issue with rape culture lurking beneath the surface at Liberty High School. Season 2 delves further into that culture with some seriously upsetting revelations. What is the clubhouse on 13 Reasons Why? The jocks at this school are more sinister than you think.

At the beginning of the season, Clay receives a threat that warns warns him that what happened to Hannah and Jessica has happened before and will happen again if nothing gets done. In order to figure out who sent it, he starts investigating where the picture was taken — and by using 20th century "enhance" technology (a microscope) he identifies a piece of school property. He's not the only one to learn of the clubhouse. Hannah's old poems also reference the mysterious place.

The clubhouse, as it turns out, is a storage room behind the football field that the student athletes have access to — possibly even access granted to them by their own coach. It's not uncommon for a school like that to have some kind of little to well-known hideout. Unfortunately, this one is not all fun and games.

On the show, the clubhouse is a place where students go to skip class, drink, smoke... as well as sexually assault and rape girls. Zach even has a video on his phone of Marcus, student body president, getting a lap dance from a sex worker. What's worse is that Bryce and the other boys keep pictures detailing their wrongdoings — sort of as proof, sort of as trophies, and sort of as a way to keep them all quiet. If one goes down, they all go down.

Justin claims not to have ever been to the clubhouse. It's actually Zach who ultimately narcs on them. So not all of the popular boys at Liberty were ultimately implicit, just a whole bunch more than you may have thought.

The evidence there, kept under lock and key, should be enough to take down Bryce and bring justice to the many women he has assaulted. However, by the time Olivia Baker and Mr. Porter reach the clubhouse, it has been wiped clean. Clay, bumbling kid detective that he is, left the polaroids (which, too his credit, are technically child pornography and should not be in his possession on school grounds) in his Prius and they get stolen. At the end of the season, without giving everything away, they are destroyed.

The clubhouse is an unfortunate representation of the systems in place that inadvertently or intentionally protect predatory boys and men in our society. They protect each other. They continue the cycle. They normalize behavior ranging from disrespectful to monstrous and they give it a cute name that makes you think of your childhood back yard or Little Rascals. Boys will be boys, after all. The name "clubhouse" also evokes organizations traditionally comprised of men only like a social, country, or gentlemen's club that promote loyalty and at best shut women out and at worst keep them silent against harassment and rape. These patriarchal institutions start super young, as the clubhouse proves and it's just another distressing example of teen behavior on 13 Reasons Why.

More like this
Dr. Anna Pou Is Still Practicing Medicine After Facing Murder Charges
By Brad Witter
'Children of the Underground' Subject Faye Yager Now Runs A North Carolina B&B
By Brad Witter
The 'Black Bird' Stars Are Both Heading Back To Apple TV+
By Brad Witter
At 14, Tatiana Maslany Was Obsessing Over Tamagotchis & The Spice Girls
By Gabrielle Bondi
Get Even More From Bustle — Sign Up For The Newsletter