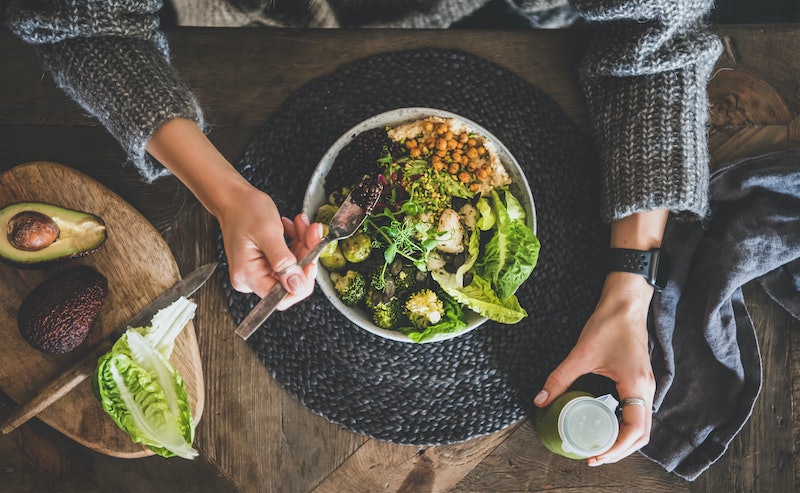 Netflix has something of a tradition of starting debates around diet, environmentalism, and health. And their latest original documentary The Game Changers is mythbusting around meat, protein, and their place in sport. Following athletes with plant-based diets, the documentary questions whether the mainstream thinking behind sports nutrition is right, does it increase performance and is it actually beneficial for the body? But one term that kept popping up throughout documentary was "plant-based", rather than veganism. So, what is the difference between plant-based and veganism?

Quite often the terms plant-based and veganism are used interchangeably, usually to refer to someone who doesn’t eat any animal products, including meat, eggs and dairy. Whilst there is some crossover, the two actually have different meanings. But to put it simply, veganism is a lifestyle, and plant-based is a diet.

The Vegan Society defines veganism as “a way of living which seeks to exclude, as far as is possible and practicable, all forms of exploitation of, and cruelty to, animals for food, clothing or any other purpose.” Donald Watson, the founder of Vegan Society coined the word back in 1944 by cutting out the middle letters of the word “vegetarian”. But, according to the organisation, it wasn’t until 1949 when Leslie J Cross defined the term, meaning: “to seek an end to the use of animals by man for food, commodities, work, hunting, vivisection, and by all other uses involving exploitation of animal life by man.”

It’s important to point out, concepts around veganism and plant-based diets are practically as old as humans, it’s just the words that are modern. Archaeologists have even learned some of our prehistoric ancestors didn’t eat animals or their byproducts. And across the globe many groups of people adhere to a plant-based diet for cultural reasons.

The diet the athletes in The Game Changers adhere to is platt-based, which BBC Food defines as “any diet that focuses around foods derived from plant sources.” It’s more of an umbrella term encapsulating vegans, vegetarians and flexitarians where the main focus of their diet is plant foods. There isn’t necessarily a moral pressure there, it’s simply a diet like raw food or the Atkins diet. So you could be plant-based solely for your health rather than the welfare of animals or environmental reasons. You could be plant-based and still wear leather, whereas a vegan wouldn't for example.

Interestingly, some food that vegans can technically eat like refined foods, people on a strict plant-based diet wouldn’t eat. Chips, flour, and refined sugar, for example, are all derived from plants, but they aren’t a plant food in the same way as whole vegetables, pulses, seeds, and grains.

The terminology is complex, and in some cases interchanging with sliding scales. Whether you're a vegan, plant-based, or something completely different, The Game Changers is opening up conversations on whether animal products are as necessary as we think.