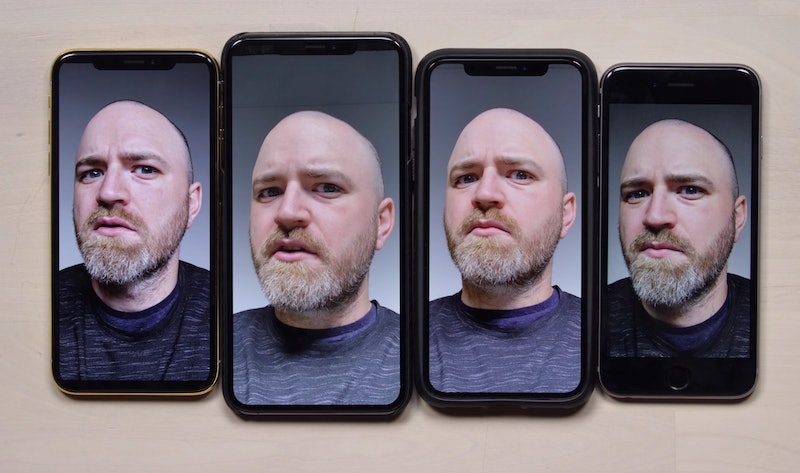 When taking a selfie, there's only one rule: you will take more than one. In fact, you'll probably take around 50 trying to get the perfect shot. Some won't have the ideal amount of lighting, some just won't look like you, and, after a few more, you'll notice the blemish that you inevitably forgot to cover up. However, this problem seems to have disappeared with Apple's latest release. Some people who have bought the new model reckon that its camera is smoothing and brightening their skin. So: does the iPhone XS have a beauty filter or are you really that glowing IRL?

I unfortunately don't have an iPhone XS to try this out on but luckily several people have done the work for me. The first time I noticed an actual comment was on Twitter when YouTuber Lewis Hilsenteger posted an unedited selfie. "iPhone XS portrait seems like it's doing more aggressive skin smoothing," he wrote, racking up hundreds of retweets. This was followed by several Reddit threads showing side-by-side selfies demonstrating out the supposed beautifying effect. (Note that fellow smartphone maker Samsung does have a beauty mode, though it's optional).

According to rumour site AppleInsider, the company is looking into the situation. I've reached out to the company for comment, but am yet to receive a response. If Beautygate (as it's been dubbed on social media) is real, users can potentially expect a fix in a future iOS update.

But is it real or just a figment of our imagination? Well, an expert in cameras believes it's both. As Sky News reports, the iPhone XS contains an entirely new camera featuring advanced algorithms that improve image quality and something called Smart HDR which appears to add more highlight and shadows to photos.

Photographer Sebaastian de With — who works at camera app company Halide — has written an easy-to-understand explainer. In a nutshell, he says there is no secret selfie filter. However, he does reckon that photos taken on the new iPhone look smoother thanks to advancements in the photographic technology.

"People feel that the phone smoothens things for two reasons: better and more aggressive noise reduction due to merged exposures, and merged exposures reducing sharpness by eliminating sharp light/dark contrasts where light hits parts of the skin," he wrote.

Luckily, de With explains the technology in a much simpler way. He said that the camera reduces the harshness of the surrounding light, the brightness of lighter areas, and the darkness of shadows, making skin look smoother.

He also described how the iPhone XS takes several photos in one go and blends them all into one image, creating a lot of noise i.e. graininess. The camera seeks to reduce this by removing some detail, creating a smoothing effect.

The beauty mode doesn't just happen to selfies. It occurs on any photo. Therefore, it's unlikely that Apple created a hidden filter just for our pleasure. In a YouTube video created after his viral tweet, Hilsenteger believed he had found the way round the issue. He toggled the Smart HDR option in the phone's settings to off but when he tested it out found that this had no effect on photo results.