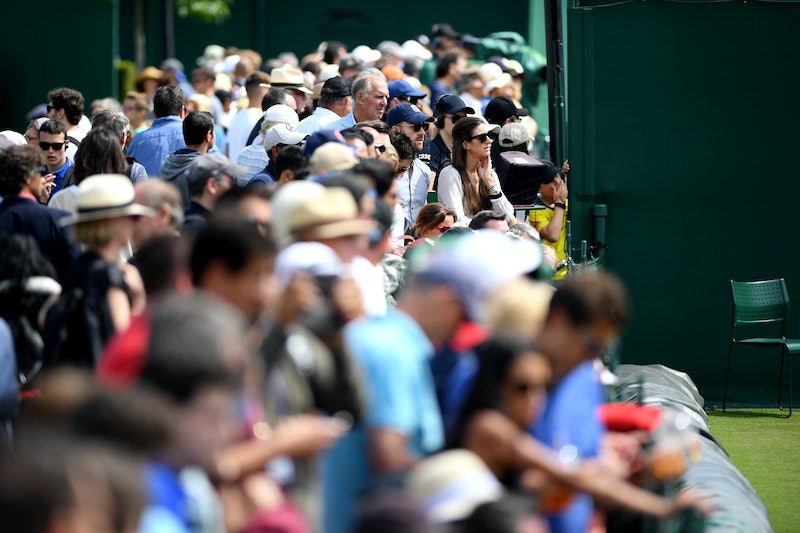 Getting tickets for Wimbledon can often be a tad confusing. Do you queue, or do you book in advance? How long do you have to wait? And where on earth are the strawberries and cream stands? Plus there's a lot of planning involved when it comes to figuring out what time you should aim to get to the All England Club. So what's the latest time you can arrive at Wimbledon?

Obviously, the time you arrive depends on the match you're watching. However, if you have pre-booked tickets for a match, it appears that you won't be refused entry if you turn up late. I spoke to the Wimbledon Box Office and found that, if you arrive as a match is in play, you'll be asked to wait until change of ends before you're allowed to find your seat. This is totally understandable. I mean imagine accidentally tripping over people as you get to your seat and inadvertently distracting the players. Talk about awks.

The Box Office tells me that, if you've got tickets for the outside courts, you should aim to arrive for 10 a.m. before the 11 a.m. start. The centre courts (Centre and No.1 Court) start at 1 p.m., but the venue tends to get rather busy around 10.30 a.m., so your best bet is to just be there early morning and hang around so you can get to your seat before the match starts.

Buying tickets on the day

But what about getting your tickets on the day via the queue? Well, ticketless Wimbledon fans are known for their determination. Many arrive in the early hours of the morning, and some even camp overnight.

According to the 2019 Wimbledon Guide To Queuing (which, yes, is the most British document known man), when you join the line, you'll be given a queue card. "This card is dated and numbered to show your position," they state, and "[i]t must be retained until you reach the Turnstiles at Gate 3 and have purchased a Championships’ ticket."

Order of the day

Going by the Guide To Queuing, the order of the day is as follows: at 6 a.m., those camping will be "woken by the Stewards to pack your camping equipment, and form a queue." At 7.30 a.m., "[s]tewards will issue wristbands, starting at the front of the Queue, to people queueing for Centre, No.1 and No.2 Court tickets. The number of wristbands issued exactly matches the quantity of tickets available on that day."

They then state: "The Queue starts moving into a limited part of the Grounds from 9.15am. The full Grounds open at 10.30am. Keep your Queue Card with you until you reach the Turnstiles, where you will be able to purchase a Show Court [Centre, No.1 and No.2 Court] ticket or a Grounds ticket."

It's possible to go after work

For those who don't want to camp overnight or arrive in the wee hours of the morning, there are options. "You can arrive throughout the day if you're hoping to procure grounds passes," says Lonely Planet (though they also comment "it's advisable to get in line a few hours before the grounds open ... if you want to catch a full day of matches.") Lonely Planet also point out that it's possible to go after work:

"It is possible to fit in a full day of work and still catch some evening matches if you arrive shortly after 5 p.m., though this depends on the weather (it's less busy when cloudy) and who is on court (Federer, Nadal and Serena Williams clog the turnstiles)."

So, depending on how far you are from Wimbledon, you could leave work at 4 p.m. and still be in with a chance.

As Wimbledon states in the Guide To Queuing, there are many things to consider before you make your way to the All England Club. For example, there are "[c]omprehensive security measures" in place, which involves ticket and bag checks before you enter the grounds. As quick as staff intend to make these checks, it all depends on having your bags ready and making sure you're not bringing any prohibited items with you (yes, that includes selfie sticks). For other tips on preparing for the day, check out the Guide To Queueing.

In short, to get the most out of the oldest tennis tournament in the world, preparation is key.