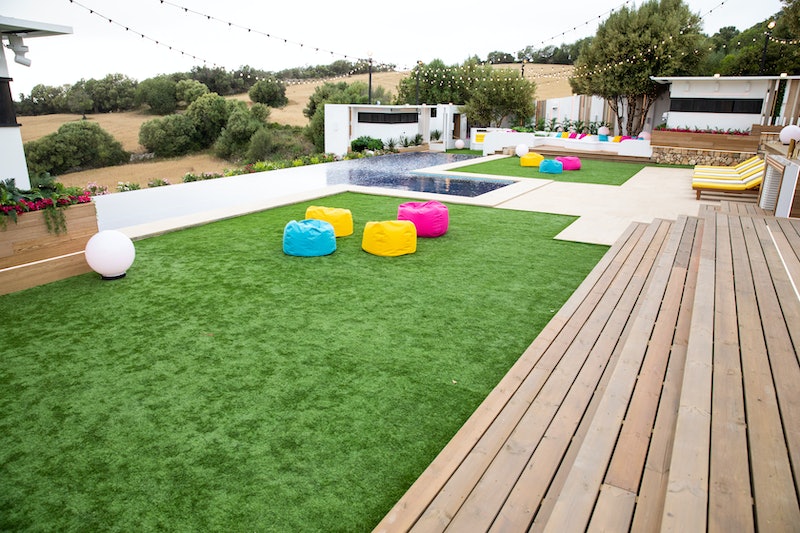 Summer is fast approaching and so is the Series 5 of ITV reality phenomenon Love Island. This year's fresh bunch of islanders were recently unveiled, and viewers are gearing up for what promises to be yet another gripping series. Once again fans of the show can begin to look forward to their nightly instalment of villa action, but where is the Love Island 2019 villa located? Here's all you need to know about what will become the most talked about house this summer.

According to the Express, the fifth series of Love Island will once again be filmed on the Spanish island of Mallorca. The 2019 villa, which was also used in the show's previous two seasons, is located on the eastern side of the island, not far from Sant Llorenc des Cardassar — and Casa Amor, the show's infamous second villa, can be found close to the main set on the same island. Although fans of the show are more than familiar with the current Love Island set, the villa has got a bit of a facelift.

Pictures from the 2019 villa reveal that the iconic fire pit and T-shaped infinity pool are just as we left them, but there are a few of new additions too, including some fun new signs around the house.

The kitchen has had a bit of a spruce up and has the phrase "Eat, Sleep, Crack On, Repeat" emblazoned across the side of the counter.

The villa's hot tub has now been moved over to The Hideaway. Speaking to The Sun, Love Island boss Richard Cowles said "it wasn’t getting enough use" in the main villa. "Now islanders will be able to go on dates to The Hideaway and have a night in the hot tub," Cowles said.

As reported by Radio Times, the first two series of Love Island, which starred the likes of Calum Best and Bianca Gascoigne, took place on Armstrong Island, Fiji, back in 2005 and 2006. After the show was relaunched in 2015, filming took place in Ses Saline on the Spanish Balearic Island of Mallorca, before moving in 2016 to the villa viewers know and love today.

If you've ever wondered what life is like for your favourite islanders, you're in luck, because spending a night in the TV villa isn't exclusive to just participants of the show. According to the Metro, you can now book your very own Love Island experience and stay at the famous property. A week-long break will set you back around £4,752, and guests are given access to four ensuite bedrooms, a swimming pool, the outdoor terrace, a landscaped garden, a fully-equipped kitchen that comes with your very own private chef, as well as a concierge, and various spa treatments.

As reported by the BBC, the new series of Love Island will return to ITV2 on Monday, June 3, and will see 12 brand new contestants arrive on the island with the hopes of finding love. The 2019 cast are quite a varied bunch, and the line-up includes a firefighter, a ballroom dancer, a scientist, and a Strictly Come Dancing pro's sibling. Host Caroline Flack will also be making her return, and when discussing why she thinks Love Island is such a big hit, she said, "The secret behind Love Island's success is that it's a really simple show about a really complicated subject. It's relatable and that is the thing that is never going to change."