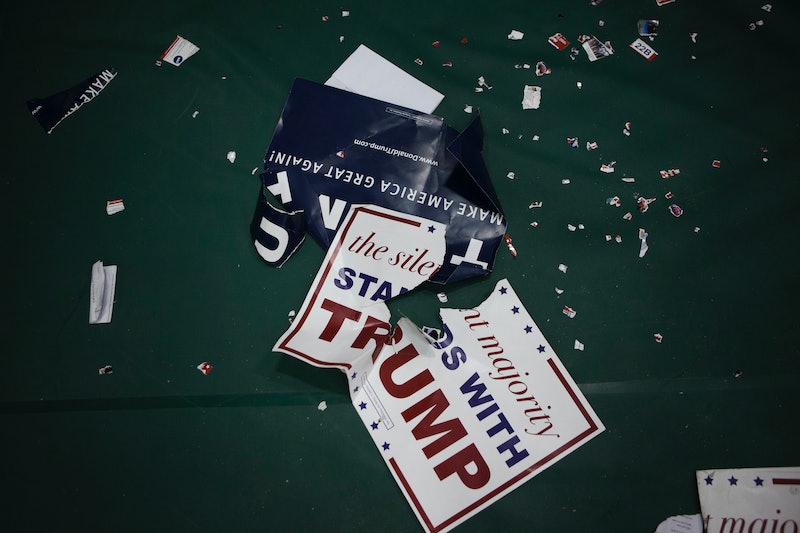 Kellyanne Conway's husband has become an outspoken critic of President Trump lately, taking to Twitter to voice opinions his wife — a counselor to the president — certainly does not seem to share. According to a feature published Wednesday by The Washington Post, Kellyanne's husband George Conway supposedly backs the Meeting of the Concerned, a secretive group of Trump critics. Bustle reached out to both Conway and the Niskanen Center, a think tank potentially linked to the secret group, for comment.

Update: The Niskanen Center confirmed in an email to Bustle that it does, in fact, host the group's meetings.

The Washington Post first wrote about the Meeting of the Concerned in November 2017, when it reported conservative columnists and former Republican lawmakers supposedly met every two weeks to discuss how to protect Mueller's investigation. In that 2017 article, the Meeting of the Concerned self-identifies as "a group of citizens united by our deep concern over threats to the integrity of American democracy and the rule of law." A link the Post supplies to the group's "first public statement" brings you to a page on the Niskanen Center's website calling for Republican support of the Mueller investigation.

According to the Niskanen Center's "about" page, it is a nonpartisan, nonprofit think tank located in Washington D.C., launched in January 2015. The Center works to "promote an open society" and prefers to remain unconstrained from labels such as "progressive, liberal, centrist, conservative, and libertarian."

On the Niskanen Center's Twitter page, it's shared rare comments critical of Trump.

It's currently unknown whether the organization is behind the Meeting of the Concerned. But a New York Times article from May of this year states the Niskanen Center hosts "a semimonthly invitation-only gathering of Trump critics called the Meeting of the Concerned," which keeps its attendance list mostly private. This could be the circle reports suggest Conway has been spotted with.

But he wasn't always a Trump critic. Conway was actually an adamant supporter of Trump during the 2016 campaign, telling the Post he cried tears of joy when his wife's successful campaign led to the business mogul's victory.

"Now I cry for other reasons," said Conway.

In the months after the president was inaugurated, Conway decided to turn down a job offer with the Justice Department. According to Politico, he felt uneasy about Trump's firing of FBI James Comey and Robert Mueller's appointment as special counsel, but released a statement saying he continues to support the president and his administration.

A day after officially rejecting the position, Conway tweeted a criticism of the president's use of social media, says Politico. Since then, Conway's use of Twitter has become somewhat iconic. The Washington Post published an article on his feed in March 2018, saying Conway is "trolling" his wife's boss. Kellyanne, however, remains a staunch supporter of Trump.

Despite Conway's apparent disdain for Trump, Kellyanne ironically would never have met the man if it weren't for her husband. According to The Washington Post, when the couple was newly married, they moved into Manhattan’s Trump World Tower. Conway caught Trump's attention at a condo board meeting, and was offered a position to join the board.

Conway declined, but offered the position to his wife. Kellyanne accepted, and the rest is history.