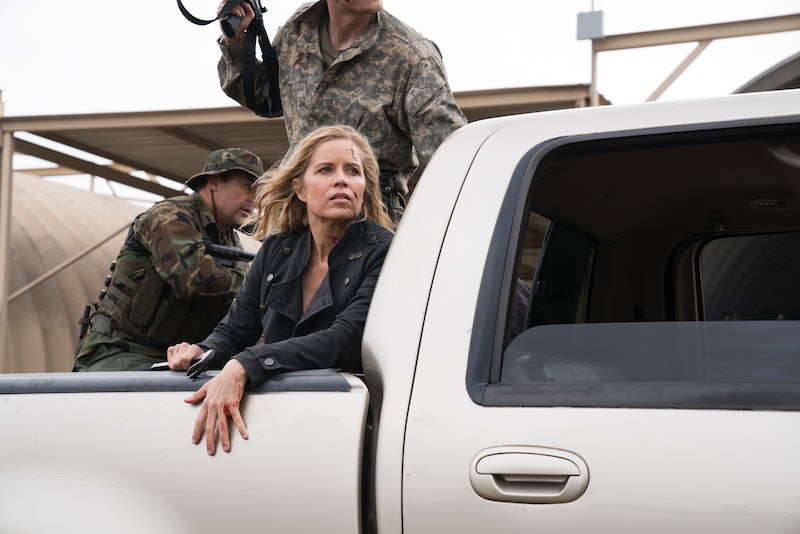 A new family has joined Fear The Walking Dead, bringing all the dysfunction of a Thanksgiving dinner to the high stakes of the zombie apocalypse. After several sadistic attacks, and one nasty scene with some rats, Madison and Travis go to the Otto compound on the June 4 episode of Fear The Walking Dead. The two men do not get along, so the safe haven they claim to provide is already rife with conflict.

At the beginning of the episode, Travis, Alicia, and Madison are taken by the same Army men who captured Nick and Luciana at the end of Season 2. These soldiers aren't exactly regulation. They're exerting their power and using their weapons in a couple of gross ways — separating families, demanding that people be processed, and recording how long it takes people to turn by murdering them. The de facto leader, Troy Otto, makes some racist remarks about Travis and insinuates sexual remarks about Madison. They even threw Travis in a zombie gladiator pit — thank goodness he is finally ready to be a fighter. Really lovely people.

Luckily, another contingent lead by Troy's brother Sam Otto swoop in while our heroes are making their escape and lend a hand. Sam seems cool, and nothing like his brother. His people use military resources but don't seem to be part of the armed forces themselves. Sam convinces Madison and Travis to take their family to his father's compound, with the help of a last minute zombie attack.

So Nick and Madison are reunited — though the group doesn't stay together for too long. Travis escapes the Army compound in a helicopter with Alicia and Luciana, while Madison and Nick jump in the back of a truck... with Troy. That's not an ideal travel situation, but hopefully they'll all make it to the same place intact.

As much as I don't like or trust this new group or their compound, I have to say that it was nice to see people still able to escape a zombie attack by helicopter. That seems like such a technological novelty for the Walking Dead universe. Meanwhile, I assume that Strand is now running things over at the hotel, and whatever happened to Ofelia? She reached the border before the others in Season 2. Maybe they'll run into her at the Otto compound.