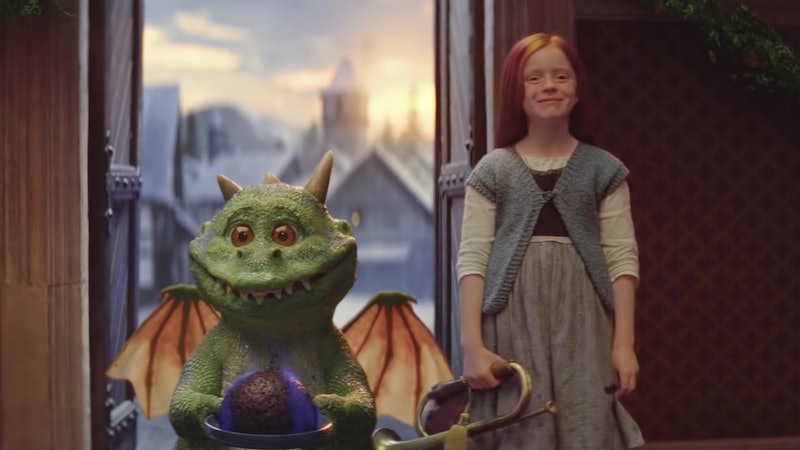 The countdown to Christmas is on with just over six weeks until the big day. Cue the festive playlists, winter markets, mulled wine and, of course, the Christmas adverts. As Brits, nothing brings us more joy than curling up on the sofa watching companies compete for our affection with their Christmas adverts. So I'm sure you'll be pleased to know John Lewis' Christmas advert has arrived, and it's as delightful as ever. But the question on everyone's lips is bound to be, what's the song on the John Lewis 2019 Christmas advert, and who's it by?

This year, John Lewis have decided to tell the story of Excitable Edgar, a little dragon, and his best friend Ava. John Lewis are known for their tearjerking Christmas adverts, with their story of Elton John with The Boy and The Piano in 2018 and Moz The Monster in 2017 and the Excitable Edgar does not disappoint.

Edgar and Ava live in what seems like a rural village and Edgar keeps getting a little too excited about the Christmas festivities, accidentally melting a snowman and setting alight the village Christmas tree because he can't seem to control his fire breathing ways.

After the Christmas tree goes up in flames, Edgar retreats to his and doesn't come out for some time. Until Ava devises a plan and realises that she can help Edgar put his fire breathing skills to good use. The two surprise the town folk at a big Christmas dinner where Edgar uses his pyrotechnics to set alight the Christmas pudding.

You might recognise the voice in the soundtrack to the advert, because it's none other than Bastille frontman Dan Smith. He covers the classic REO Speedwagon hit Can't Fight This Feeling Anymore and it provides the perfect pairing to this heartwarming tale.

The advert is also pretty special because it's a collaboration between John Lewis, and Waitrose and Partners for the first time ever.

If the advert has given you all the feels you'll be happy to know that you can get your hands on your very own Edgar at John Lewis for just £15. Excitable Edgar will air for the first time on television during X Factor Celebrity on Nov. 16. Who's excited? I mean it's basically Christmas now.

More like this
Lewis Capaldi Is “Really Sorry” After Pre-Sale Ticket Fiasco Guts Fans
By El Hunt
Courteney Cox & Laura Dern Proved Their BFF Status With Matching Tattoos
By El Hunt
Every Season Of 'Love Island' Ranked Best To Worst
By Alice Broster, Frances Stewart and Sophie McEvoy
Jemima Khan Used Her Own Life As Inspo For 'What’s Love Got To Do With It?'
By Darshita Goyal
Get The Very Best Of Bustle/UK
Sign up for Bustle UK's twice-weekly newsletter, featuring the latest must-watch TV, moving personal stories, and expert advice on the hottest viral buys.