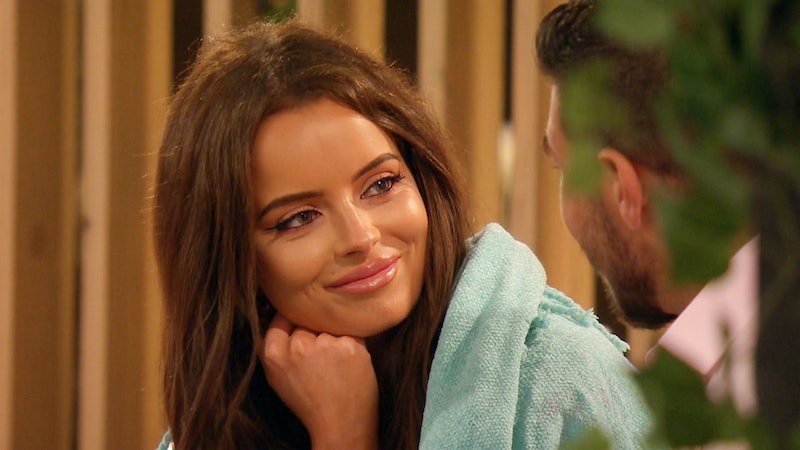 There are many things you notice when watching Love Island. Be it the Dyson hair tools in the dressing room, or the fun M&S cups the Islanders are drinking out of this year — eagle-eyed viewers are always pointing something out. And most recently, the show has got us talking about, well, the weather in Mallorca. While this may sound strange, it relates to the fact that the contestants seem to be constantly wrapped up in blankets this year to stave off the cold, it seems. So what is the temperature at night in Mallorca? And why is everyone going blanket chic this series?!

First up, let's assess the evidence. This year, the blanket-wearing has seemed a lot more noticeable, especially while the Islanders have chats with one another in private locations during the evenings.

During her chat with Maura yesterday, for example, Elma was wrapped up all warm and cosy in a mauve coloured blanket, chucked over her legs apparently to keep her warm.

But she's not the only one to do so. Take, for example, fellow new(ish) girl Maura, who was so cold on day one, her love rival Mollie Mae had to lend her a jacket, which was hella awkward when she then started hitting on MM's man Tommy... wearing said jacket.

However, Maura is also not opposed to a casual blanket thrown over her shoulders to keep things all cosy and warm, as you can see in the first image above.

And even when they're in their couples, keeping each other warm, the blankets seem to come out. Just check out Amy and Curtis with their pastel pink number:

And Amber and Michael with their blue one:

Even hard man boxer Tommy Fury can be spotted in a turquoise throw now and again. He even likes to wear his inside when he gets reaaaal chilly:

I think you'll agree that the proof is there; this year's Islanders are officially taken with their blankets. But why do they even need to wear them? They're in sunny, hot Mallorca, right?!

Well, actually, it can get a little chilly in Mallorca in the evening, much like with many hot islands. It can actually dip to around 16 degrees around this time of year, despite being nearly 30 in the day. And while that doesn't sound that cold to us Brits, when you're in minimal clothing like the contestants, I can see why things can get a bit cold up in there.

Wes Nelson from last year's series actually told Capital Radio that the Islanders are encouraged to keep clothing to a minimal, which could explain why they are in need of blankets to get warm.

"I used to try and go out in a hoodie and heavily clothed in the morning because sometimes it is a bit chilly but yeah, you'd have to take that off," he explained.

"Obviously we'd like to be in the shade a bit of the day because it is roasting hot, so when you're in the shade it is actually quite cold."

Brrrr, bring on the blankets.