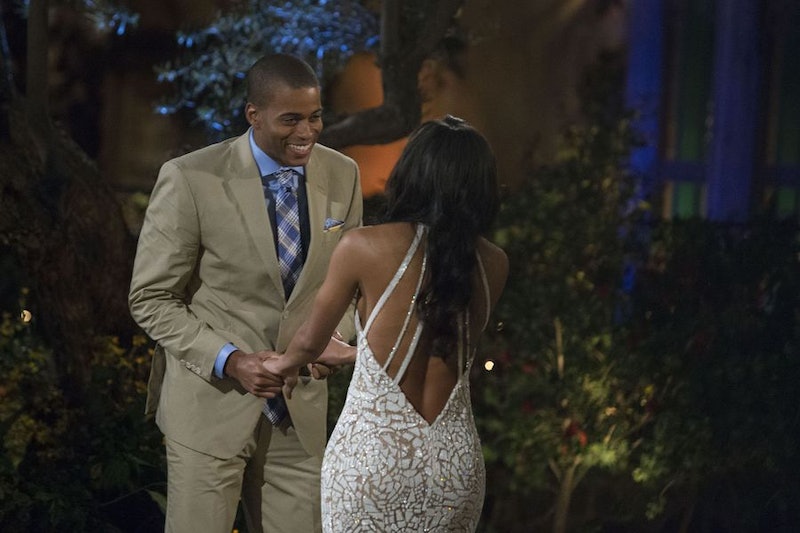 I don't care what anyone says about the women on The Bachelor — it's pretty clear the men on The Bachelorette have all the drama, and Monday night's episode was proof of that fact. The fighting was between several different guys at varying times, but at the end, Eric was the center of the drama on The Bachelorette, and it can't mean good things about his future on the show. That's not to say I don't think he's in the right. Based on what I know about Lee from outside the show, he's not really there for the right reasons either. But no matter who is right in this argument, being the drama magnet never works out well.

Toward the end of the ep, it became glaringly obvious that now that Whaboom and Blake were gone, the next big feud was going to be between Lee and Eric. It started with Lee claiming that Eric couldn't possibly understand anyone's feelings (including his own) for Rachel, because he'd never been in love before, and it all kind of spiraled from there... and before I knew it, Eric was arguing with several of the guys, telling them to keep his name out of their mouths.

Even though it's totally understandable why Eric would be tired of the way Lee was talking to (and about) him, his meltdown isn't exactly promising for his longevity on this season. The most dramatic contestants often don't make it to the final rounds; Corinne, as much I adore her now, didn't make it to the final rounds of The Bachelor last season, and Chad and his temper didn't make a great impression on The Bachelorette last year... or Bachelor in Paradise. And, Alex became a magnet during Chad's drama and found himself kicked off too — even though he wasn't really doing anything. Being at the center of the drama is not the way to win anyone's heart, in real life or on a reality dating show.

If Eric wants to stick around, he should try to make more of an impression on Rachel than worrying about what the guys think about them, because at the end of the day, her opinion is the only one that matters. Next episode seems to involve part two of these shenanigans, so maybe he'll cool off a bit and refocus on why he's there? Lee's not worth his time, but Rachel is.