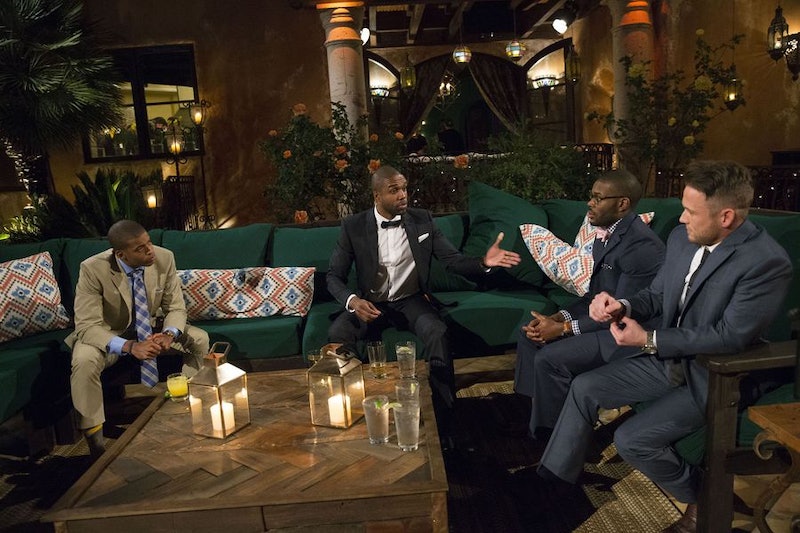 When it comes to casting a reality show, there needs to be a certain amount of tension, and that often comes from "drama" generated from clashing personalities. On Monday night, one such example came from Bachelorette contestant Lee Garrett, who took a strange stand against fellow suitor Eric for "yelling" in an earlier moment. He also claimed that since Eric has never been in love, he didn't have the experience to stick it out with Rachel. But Lee has also made it into the news for some of his alleged off-camera behavior. Before he set all of his social accounts to private, alleged tweets from Lee Garrett's account were claimed to have said things like, "I wholeheartedly support the inhumane torture of terrorists," and he allegedly called activist group Black Lives Matter "a terrorist organization." When Bustle reached out, ABC and Warner Bros. declined to comment. A rep for Lee could not be reached.

Why did ABC cast Lee, if he has openly bigoted alleged tweets on his profile? Lee's Twitter profile is private now, and according to Variety, "an insider" says that "the network only learned about the tweets when they were approached by the media on Wednesday, and had no prior knowledge of their existence, despite background checks." And, of course, now, months after the show was filmed, there's no way to kick him out or cut him out of the show because these comments came to light. So, unfortunately, The Bachelorette is drawing out the Lee/Eric conflict for another episode, and trailers show Lee in conflict with other black cast members. "I get tickled when I smile and an angry man gets angrier," Lee can be heard saying. "Tell me that's not aggressive," he continues, with footage of both Kenny and Eric reacting to his comments. "There's a longstanding history of calling black men aggressive to justify other things," Will, who is also black, explains.

If I'm being generous, I can understand why Lee was an initial frontrunner for the producers. Rachel, like Lee, is Southern, and she clearly has some love for Southern traditions, judging by the horseback ride she took. But it's hard to imagine that no one who works for the show came across these comments. Social media is huge for Bachelor and Bachelorette contestants. It's how they promote the show and cultivate fan bases. Twitter user Erika Esola-Imburgio was able to find dozens of tweets allegedly taken from Lee's personal account. Every employee of ABC and The Bachelorette was unable to do the same? The situation has led some people to allege that Lee was intentionally cast despite his alleged tweets to stir up drama on the show with the first black Bachelorette. (Harrison's above tweet denies this as he claims no one at the network knew about the alleged tweets.)

One thing gives me hope, though, and that's Rachel. The way she quickly disposed of DeMario after it was revealed that he had some unfinished business with an ex, kindly asked Fred to go home after a painfully awkward kiss, and kicked off "WhaBoom" and his frenemy Blake E. after just two episodes shows she's not here to mess around. Black women can often sense, from microaggressions and social cues alone, if someone is potentially harboring bigoted views, and Rachel certainly isn't making her decisions for drama's sake.

Once she sees and hears that Lee has clashed with multiple cast members of color, seemingly just to bring them down for not "deserving" to be there or to win, it's possible she'll send him home right away. But it's unfortunate that he landed on the show in the first place, because it makes it less of a safe space for Rachel and her group of men of multiple races and ethnicities (and, you'd hope, more progressive attitudes) to find love. And that's just not worth it for a few bleep-filled promos.