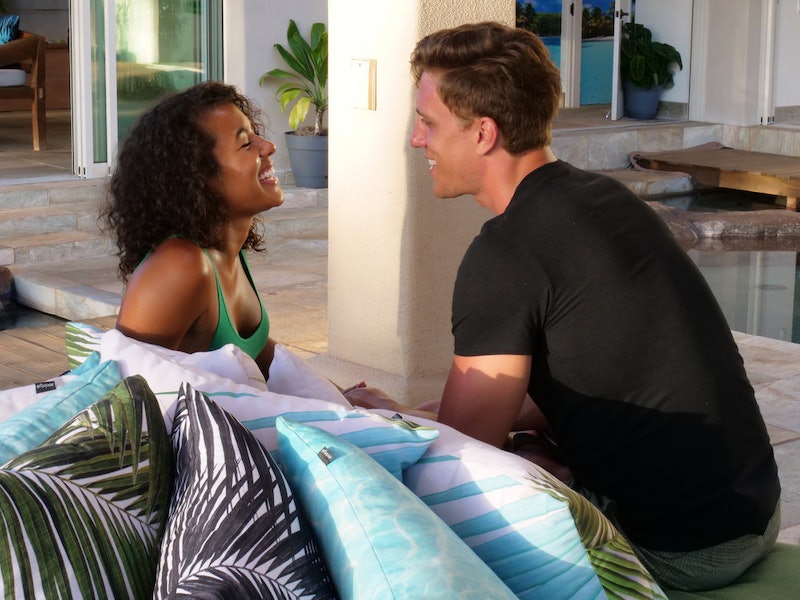 Temptation Island isn't the kind of reality TV show that you can win, but if it were slightly more like The Bachelor, then Morgan Lolar would be the lucky woman walking away with the final rose (or one of them, anyway). In the final moments of the season finale, it's revealed that not only are she and Evan still together, but they're engaged! It's not been announced yet when Evan and Morgan are getting married, but with this whirlwind romance, you never know just how quickly things could unfold.

Fans will remember that at the start of Temptation Island, Evan was pondering whether or not he should propose to Kaci, his on-again, off-again girlfriend of 10 years. Going on the show was meant to help him figure out if he was ready to take that next step — and if not, why. And it did...just not with the results Kaci was hoping for when they signed up.

Considering that, after a decade together, Evan was still uncertain about getting engaged to Kaci, it's surprising that he chose to propose to Morgan after six months together. But with everything else in their relationship having unfolded so quickly and so publicly, it's possible that their wedding will be on a similarly fast track.

The news of Evan and Morgan's engagement actually leaked on Twitter back in February, and since then, fans have been buzzing with opinions about the couple. Some seem supportive:

While others are, well, a little more skeptical.

There is one person, however, that seems surprisingly cool with the engagement. Kaci, now Evan's ex, told Bustle via email that she was actually relieved when she heard the news.

"When I heard about their engagement," Kaci began, "I actually felt such a sigh of relief. I even texted Val [Osipov, another castmate on the show] as soon as I found out and asked him if it's normal that I'm so OK with this. I think I felt so relieved and happy about it because I knew [Evan] was really gone and out of my life for good finally, and that I was really free."

She continued to say that she "wish[es] them the best" and that "hopefully Morgan can heal and change him for both of their sakes. I wish them a happy, healthy marriage and I genuinely can't wait to find my person because my rose-colored glasses are off and Evan was NEVER my person."

And Evan, too, sounds like he's at peace with the way things have turned out. Ahead of the Temptation Island season finale, he posted on Twitter saying that he's happy with how everything has worked out in the end. "Stayed up all night counting my blessings," he wrote. "Thinking about the ups and the downs. So grateful for ALL OF IT."

Whether Morgan and Evan decide to wait 10 years or 10 minutes to tie the knot, don't expect to see them back on Temptation Island before making the decision.