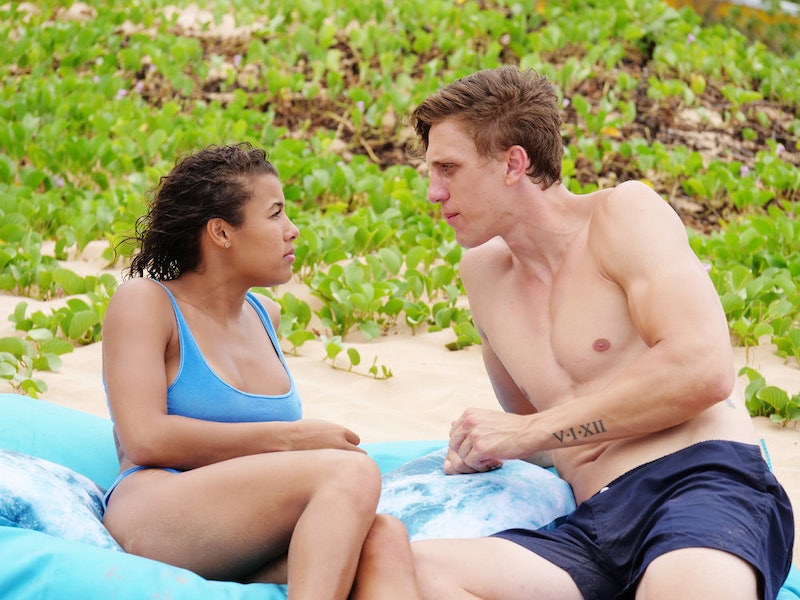 It looks like Temptation Island has worked its magic on Evan, who has been almost completely wooed away from his long-term girlfriend, Kaci, by island single Morgan. Evan and Kaci had been together for 10 years on and off before deciding to come on the show. But now, it looks like Evan is willing to leave Kaci behind and give his heart to the 27-year-old realtor from Washington, D.C that he just met, and there are several clues that Evan and Morgan are dating after Temptation Island.

"It definitely feels like Evan is my boyfriend," Morgan confessed while she and Evan went on yet another date in Episode 5. "Everything's like, great right now. I can't even think of another word but great." While on their date, Evan told Morgan that he felt weird for wanting her so much (I mean, Kaci is watching him cheat on her during each bonfire). But then he added that he would be willing to go for it if Morgan would "dive in" too. Morgan promised she would, and the pair waded out into the surf, kissing and holding hands.

Later in the episode, Morgan opted not to spend the night with Evan in his room, but it hardly seemed to diminish the sparks that were flying between them. Now that the show has wrapped, there are still a few signs that the fire hasn't gone out completely, and Morgan and Evan could be in a relationship now.

After last week's rocky bonfire, Bustle writer Kayla Blanton surmised that Kaci and Evan probably broke up now that Morgan has started to come between them on Temptation Island. They're relatively absent from each other's Instagram feeds, except for promotional material from the show.

However, Kaci did mention in one of her Insta stories that she wasn't about to reveal whether she and Evan were able to make their relationship work once Temptation Island finished filming. It's fair... she's gotta give us a reason to keep watching!

Okay, so in 2019, it isn't exactly groundbreaking to follow someone else on Instagram and Twitter, but it would be weird if they were dating and didn't follow each other on social media. The fact that Morgan and Evan are still following each other across multiple platforms is a sign that definitely doesn't detract from the theory that they're a couple now.

Maybe following each other is pretty tame, but these two have swapped sassy comments on each other's pics. In one pic of the show's four in-a-relationship guys, Morgan teased Evan by writing, "*chugs bottle of vodka in order to get through date with Morgan*" Evan then joked back, "shut up. you're something else" and included a crying/laughing emoji for good measure. At the very least, they're on good terms.

Given the undeniable connection between these two, it seems almost inevitable at this point that they'll end up leaving the island together — or else Evan and Kaci will come out stronger because of it. That is what they went on the show for, right?

More like this
All The Clues About Gabby & Erich's Relationship After 'The Bachelorette' Finale
By Kadin Burnett
Kourtney Kardashian Claps Back At Pregnancy Speculation On Instagram
By Jake Viswanath
Clayton & Susie Broke Up, Citing "A Significant Amount Of Pain" After 'The Bachelor'
By Jordyn Tilchen
‘The Ultimatum: Queer Love’ Is Officially On The Way
By Radhika Menon and Kadin Burnett
Get Even More From Bustle — Sign Up For The Newsletter