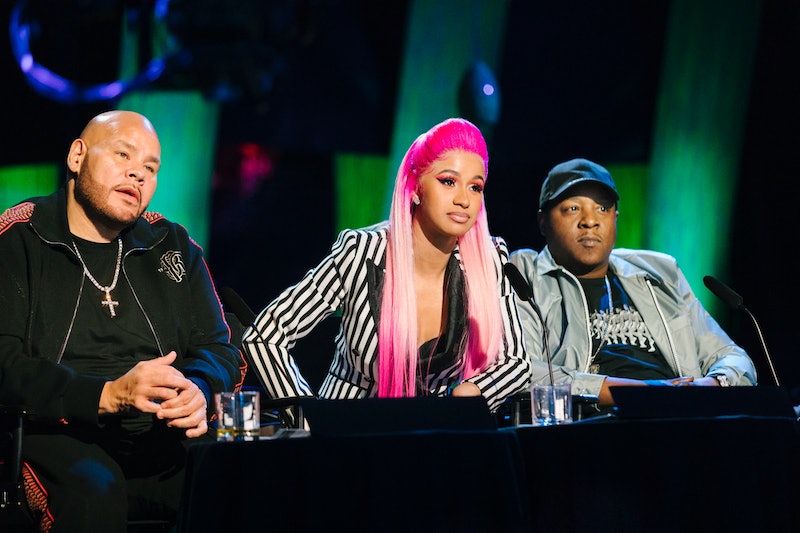 Cardi B, Chance the Rapper, and T.I. have joined forces to host Netflix's new competition series, Rhythm + Flow. The show depicts the three musicians scouring L.A., New York, Atlanta, and Chicago for the next hip hop star, slowly narrowing down their options throughout its 10 episodes. But since it's on Netflix, fans may be expecting the whole season to drop at once when it premieres on Wednesday, Oct. 9. However, the Rhythm + Flow release schedule is a bit more complicated, with the series coming out in three weekly installments.

As a result, the first four episodes will be released this Wednesday, which follow the show's audition process. According to Variety, these tryouts are filmed at local clubs and feature a crowd, which give it an authentic, open-mic sort of feel. Next comes Episodes 5-7, which drop on Oct. 16 and follow the Cyphers, Rap Battles, and Music Videos portion of the competition. During the cyphers, contestants perform in front of the judges and no audience, per Variety, which forces them to make do without the energy of a crowd. Finally, the last three episodes will drop on Oct. 23, where the Rhythm + Flow winner will be crowned.

And these three hip hop superstars have done their homework when it comes to choosing who will compete on Rhythm + Flow. "This is probably a sample of the best that the nation has to offer in hip hop," T.I. said in a teaser. And while Tip has been performing since 1999 and Chance since 2012, it's Cardi B who's the real standout, according to the aforementioned Variety piece, in which they call her "a perfect reality show judge."

That's not surprising given her successful run on VH1's Love & Hip Hop — not to mention the rapper's viral 2017 interview on The Tonight Show Starring Jimmy Fallon. She knows how to work for the camera. Her unfiltered social media presence has endeared her to fans, and her one-liners and exclamations make her endlessly entertaining to watch. More recently, Cardi B lent her star power to the 2019 heist movie Hustlers, where she played a stripper named Diamond. She talked about the experience in an appearance on The Ellen Show, where Cardi said that she didn't realize how difficult filming a movie was until Hustlers.

However, she then revealed that she's about to start working on another film. "You just said you didn't enjoy it!" DeGeneres said. "I enjoy the checks!" Cardi B said in a sing-songy voice, joking that she did Rhythm + Flow for the money, too. That said, it's clear that the "Bodak Yellow" singer enjoyed her experience on the Netflix show. "It's amazing to hear people rap on the spot," Cardi said in the same Rhythm + Flow teaser. "I just love everything. I love this whole experience."

Since Rhythm + Flow is being released on three consecutive Wednesdays, fans will have to mark their calendars to see what antics Cardi B and her two fellow judges will get up to each week as they choose the next hip hop super star.

More like this
Tristan Thompson Plays Drake’s Best Man In A Music Video Wedding With 23 Brides
By Grace Wehniainen
Move Over, 'Sunset'! The Drama-Filled Trailer For 'Selling The OC' Is Here
By Nola Ojomu
Bachelor Nation's Blake Horstmann Is Dating 'Love Is Blind' Star Giannina Gibelli
By Jake Viswanath and Radhika Menon
Travis Barker Has Been Hospitalised In California With Reports Of Pancreatitis
By Sam Ramsden
Get Even More From Bustle — Sign Up For The Newsletter