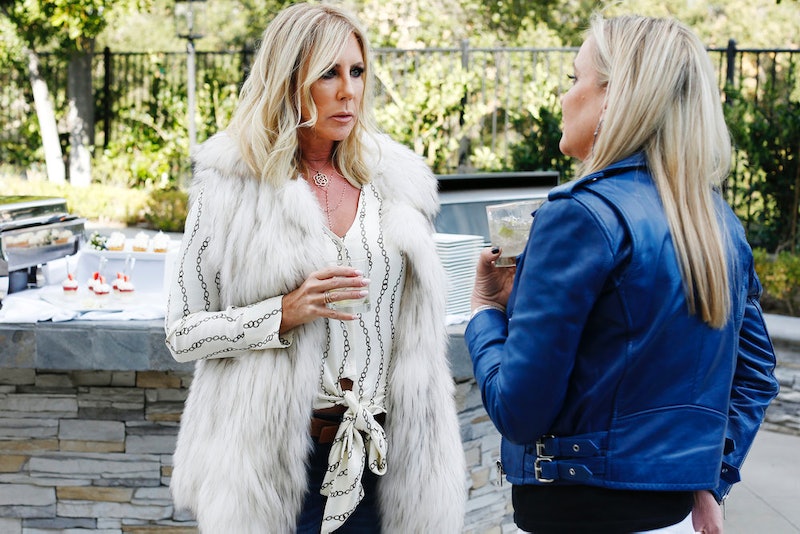 Vicki Gunvalson has long been looking to settle down and it's almost time she gets her wish. Vicki and Steve get engaged on RHOC this season and plan to get married soon. Although it hasn't happened onscreen just yet, Vicki confirmed that she and Steve were engaged in April 2019, as per Bravo, and it went down a lot smoother than anything Steve's been talking about with Tamra and the other women on those golf outings. This means that fans might get to see a proposal this season but the wedding will likely be saved for next season. If they ever plan it, that is.

Steve proposed over a quiet dinner in their home, and of course, he asked Vicki's children their permission before he popped the question to their mom. "We’re so happy. He’s an amazing guy and the proposal was perfect. I can’t wait," Vicki told People soon after. Briana, Vicki's daughter, and her husband, Ryan, flew in from North Carolina for the occasion to celebrate, and Tamra and Shannon planned a country-themed engagement party for the pair. But she's asking fans for help with the actual wedding planning, because this woman knows how to work it with Bravo super fans.

In a comment on Instagram, Vicki remarked that she wasn't sure if her wedding should be aired on Real Housewives Of Orange County or be a quieter, more subdued affair. And then, according to OK!, she asked fans in an Instagram Story if the wedding should be on TV again, and a whopping 63% of social users said that she should film it.

As reported by OK!, Vicki also asked her followers if she and Steve should have their wedding at the Coto de Zaza Golf & Racquet Club, and about the same number of people said yes as the previous questions — fans really want this golf club wedding to happen. Now that Vicki is just a "friend of" on Real Housewives Of Orange County and not a full time cast member she likely doesn't have to rush it in order to keep in sync with filming schedules.

There's no telling when Steve and Vicki plan to get married as she told Andy Cohen on Watch What Happens Live With Andy Cohen — but there is one thing that Vicki promised Briana she wouldn't do when she and Steve finally got hitched. On WWHL, Vicki said she wouldn't have a big, over-the-top, showy wedding just to have one. Vicki has been married twice before — to Michael Wolfsmith and Donn Gunvalson — and likely just wants to keep it a simple affair. With camera crews and throngs of fans scrolling through her Instagram Story whenever it does go down, of course.