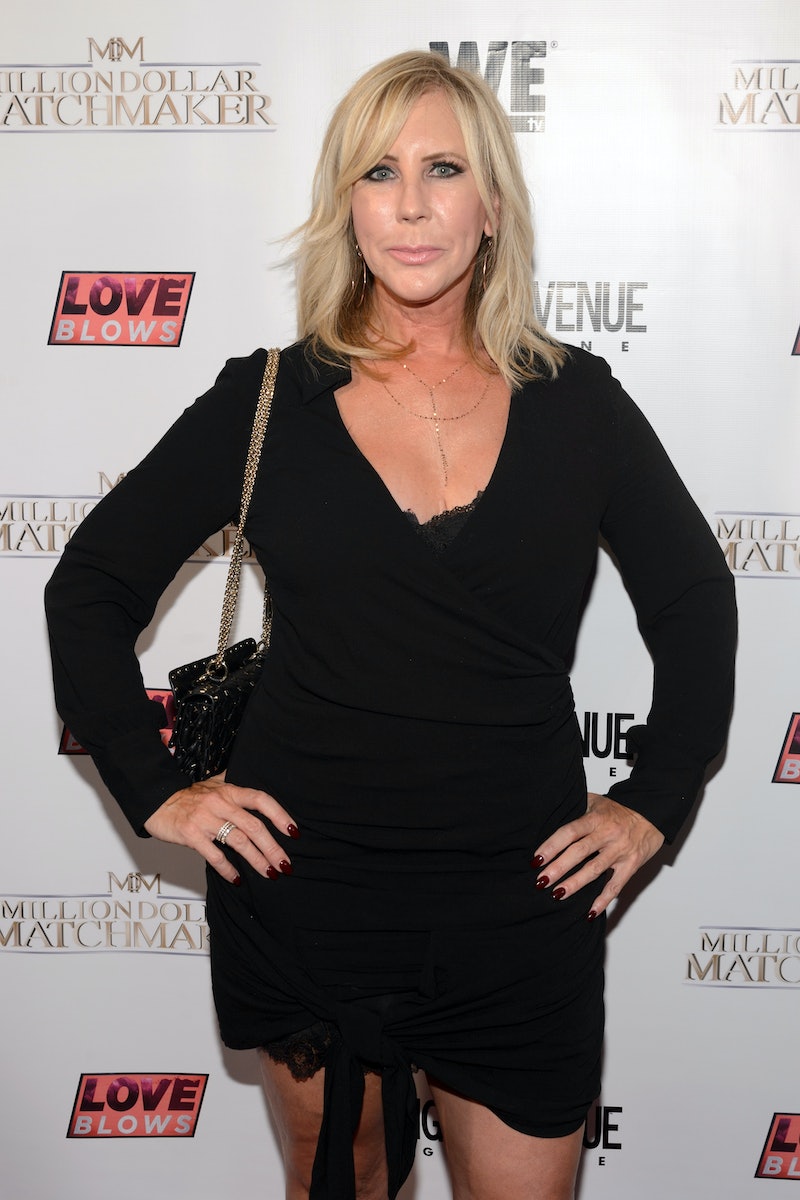 The days where "whooping it up" was a mainstay of the Real Housewives of Orange County may be more and more a thing of the past. "OG of the OC" Vicki Gunvalson isn't a full-time Real Housewife any longer. Instead, the RHOC vet will appear in Season 14 in a friend of the Housewives role.

Vicki's shift was alluded to in the trailer for the upcoming season, which premieres August 6 with housewives Tamra Judge, Shannon Beador, Kelly Dodd, Emily Simpson, and Gina Kirschenheiter all returning in full-time capacities. The hit reality series will also welcome mother of seven Braunwyn Windham-Burke as a full-time newbie. A cast photo was also released on July 2 sans Vicki shocked fans.

The Cato Insurance businesswoman seemingly responded to the gossip on her Instagram with her own set of photos from the cast shoot. In two of the three pics, Vicki poses next to the other two members of what is often referred to as, "The Tres Amigas," Shannon and Tamra. So far, Vicki had this to say in her caption, regarding the upcoming season:

"For the past 14 years I've opened up my life, my loves, my ups and downs on The Real Housewives of Orange County and I am proud to be the 'OG of the OC.' I am back again this season right in the middle of the action, and I hope you have as much fun watching the show as I did living it in front of the cameras. Stay tuned to Bravo August 6th."

Vicki's pivot to a smaller role next season surprises for a variety of reasons. Not only has Vicki appeared on every season, dating back to 2006, but she's never left the show for any period or been on the show in a non-full-time position. Plus, fans were hoping to see more from Vicki when news broke of her recent engagement to Steve Lodge. On the heels of the OG of RHOBH Lisa Vanderpump's dramatic departure last month, it's a lot to handle.

Not that the new season won't deliver on drama of its own. In the Season 14 trailer, Kelly and Vicki trade insults, Gina expresses marital woes in the aftermath of her divorce, and Tamra and Shannon proclaim there could be a "new" Tres Amigas forming. (Yikes.)

Fans had a pretty visceral reaction on Twitter. For the vast majority, it was a mixture of shock, awe, and in true Vicki form, emotional meltdowns.

Interestingly enough, some fans invoked the shocked reactions of one Ramona Singer, an OG from Real Housewives of New York. It's odd how potent the anger channeled through Ramona ends up being.

Inevitably, some Bravo enthusiasts expressed their hurt and confusion towards other members of the RHOC cast, offering up who they'd rather see as a "friend" instead.

A smaller group of people seemed excited about the cast shake-up. Still, the overall theme was that people were talking far more about Vicki "being demoted" than they were the events of the serie's latest trailer.

Bravoholics will undoubtedly decipher and debate the terms of Vicki's role change: was it voluntary? Could this OG have been forced out? Only August will bring answers via this Bravo bombshell.

More like this
What Jen Shah's Delayed Sentencing Could Mean For The 'RHOSLC' Season 3 Reunion
By Brad Witter and Jake Viswanath
What To Know About Simon Guobadia’s 3 Ex-Wives & Children
By Brad Witter
Yes, That Is Victoria & Another ‘BiP’ Alum In Zach’s ‘Bachelor’ Trailer
By Kadin Burnett and Grace Wehniainen
Julia Haart’s Husband Fired Her As CEO Of Elite World Group
By Brad Witter
Get Even More From Bustle — Sign Up For The Newsletter