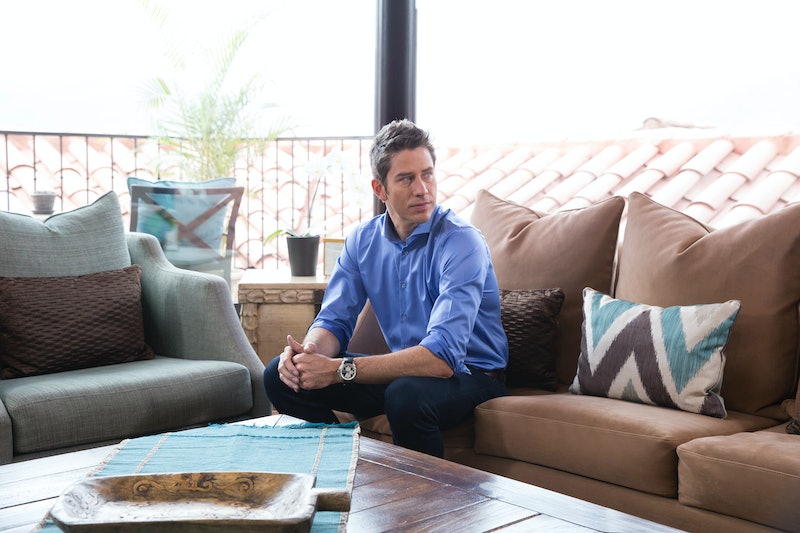 When Arie decided that he had made a mistake this season on The Bachelor, apparently he pulled a move that many boys do when they're trying to chat up an old flame — he slid into her DMs. On After The Final Rose, co-star Tia told host Chris Harrison that when she was with Lauren on New Year's Eve, preparing to watch the show's debut together, Arie apparently hit Lauren up via social media before breaking up with Becca.

"I was actually with Lauren when he reached out to her," Tia said as she and some other former contestants discussed Lauren and Arie's reconciliation. "We were together for New Year's Eve in Dallas to watch the premiere together, and she said, 'Oh my gosh, Arie just reached out me on social media. He wants to talk. ... She was asking me, like, 'Do you think I should do it? Why would he want to do this to me right before this season airs?" Lauren herself confirmed this when she joined Arie onstage later in the show, elaborating on the situation further and even naming the social media account that will forever be linked to their dramatic post-show relationship — Instagram.

“Obviously production couldn’t give him my phone number, so he reached out through Instagram," Lauren said. "He asked if I was open to having a conversation. I wasn’t very excited at first because I thought he just wanted to clear his conscience because he was happily engaged. … I did have a slight piece of me that was curious to see what he had to talk about."

OK, OK, if he genuinely didn't have her phone number, then his methods are slightly more understandable. But still, I feel like he could've gotten someone to give her a call for him instead of trying to start such a life-changing conversation via Instagram messages. He was apparently reaching out to her in order to gauge her feelings toward him before ending things with Becca, which he apparently sees as a mature decision. Not everyone is on board with that characterization, though. Plenty of people seem to think it's basically a cop out that he only ended things with Becca after knowing for sure that he could go back to Lauren.

And, they have a point. Arie has frequently characterized his jump back to Lauren as a "risk," but that seems misleading, especially, if he had been talking with her while still engaged to Becca, he basically knew he had her relationship in the bag when he left Becca heartbroken. That wasn't a risk, that was a carefully executed plan. But you do you, Arie, I guess. Becca did apparently know that Arie was having conversations with Lauren, but from what she said on After The Final Rose, she didn't know about it as soon as she would have liked.

"I had the conversation with Lauren and then I didn't want to be rash," Arie told Becca on the show's live reunion. "I knew there was all these feelings and I wanted to be certain in this decision before I came to you and tell you I wanted to pursue that." Lauren allegedly asked as soon as Arie reached out, too, if Becca was aware that he was communicating with her. Arie noted that she had asked that important question, but didn't elaborate on how he responded. It seemed clear, though, that Becca didn't feel like Arie had been fully honest with her. Lauren also said she didn't watch the finale, and therefore didn't see the way Becca was broken up with, which seemed to rub a lot of people the wrong way, too. Sweeping that part of the couple's past under the rug probably isn't the healthiest thing to do, but hopefully the newly engaged Lauren and Arie can leave the drama behind to find some sort of peace in their wedded bliss.

More like this
'Love Is Blind' Stars SK & Raven Break Up Amid Cheating Allegations
By Karen Fratti and Grace Wehniainen
Olivia Attwood Has Revealed The Truth Behind Her Mysterious 'I’m A Celeb' Exit
By Sophie McEvoy
Spencer Matthews Will Search For His Brother In A New Disney+ Doc
By Darshita Goyal and Sam Ramsden
Yes, That Is Victoria & Another ‘BiP’ Alum In Zach’s ‘Bachelor’ Trailer
By Kadin Burnett and Grace Wehniainen
Get Even More From Bustle — Sign Up For The Newsletter