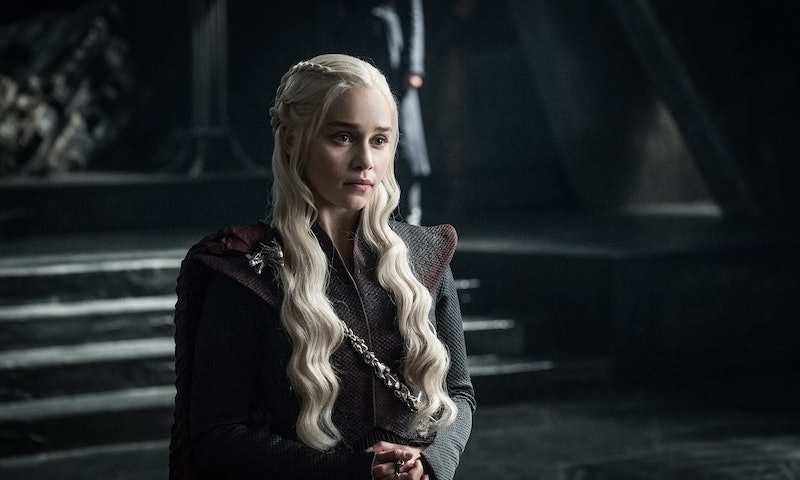 Season 7 of Game of Thrones is really delivering fans the family reunions that we have been longing for. The most anticipated character collision has to be Daenerys Targaryen and Jon Snow, who have been hanging out on opposite ends of the world for seven seasons and have remained fan favorites all along. And, after all this time, next week may be bringing us that long-awaited meeting between Dany and Jon on Game of Thrones, which is almost too much to handle.

Dany is deep in strategic military mode at the moment and her newest strategy involves summoning none other than Jon Snow to stand before her at Dragonstone (and bend the knee to her, of course). Jon is newly King in the North and Daenerys is queen of Meereen and a lot of other things (her name is really long). So, this clashing of important characters is going to be unbelievably exciting, and it could go wonderfully right or it could go horribly wrong. Isn't that always the way in Game of Thrones? Jon is usually a pretty chill guy, so it's not likely something like a woman asking him to bend the knee will upset him. But, he's also really dedicated to destroying the White Walkers, and Dany has a trove of Walker-destroying Dragonglass at her feet. If she tries to get in Jon's way of retrieving that, things could get stormy fast. Plus, Jon doesn't seem quite as concerned about taking Cersei out as Dany is (because White Walkers are much scarier), so Dany may not see eye-to-eye with him if he doesn't want to help her take King's Landing.

What makes this interaction next week even more interesting is the fact that Melisandre (who Jon banished from the north) was the one who suggested this meeting to Dany when she appeared at Dragonstone. Of course the topic of the legendary Prince or Princess Who Was Promised arose and now, the two most likely candidates will be standing face to face next week.

Plus, there's the whole thing of Jon and Dany actually being related, since his mom is a Targaryen. Neither of them know that, but fans do and it's going to be an epic meetup. An, if everything goes according to plan, two phenomenal characters will join together to take Cersei down for good. Is it next Sunday yet?