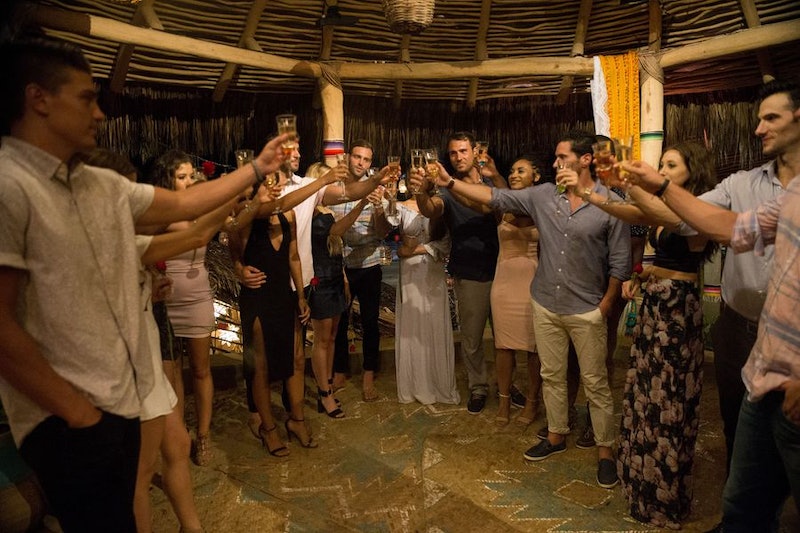 Attention Bachelor in Paradise fans: It looks like we might have our next Bachelor wedding to get ready for. Us Weekly reported on Thursday that Derek Peth proposed to Taylor Nolan, and apparently she said yes. (Bustle has reached out to ABC, Taylor, and Derek for comment, but did not receive a response at the time of publication.) After news like this, it's only natural to wonder when Taylor and Derek got engaged? Will we see these two love birds becoming affianced on the beautiful Mexican beaches where they filmed the recent season of BiP?

Well, apparently we won't see Taylor and Derek get engaged in Paradise, but the special moment did reportedly go down while cameras were rolling. Fans can all let out a collected "whew" because according to the sources who spoke to Us Weekly, the BiP stars got engaged during the taping of the reality competition's aftershow.

"Derek and Taylor got engaged last night," an insider told Us Weekly. "No one knew Derek was going to propose," the source added.

In case you're wondering, the bling was pretty good. "He gave her a Neil Lane ring," the insider told Us Weekly. Here's hoping the aftershow camera people were able to get a couple of good close up shots.

On the most recent episode of BiP, viewers saw an argument go down that at first made it seem that Taylor and Derek might break up. Taylor was justifiably triggered by some of the things Derek said, but fortunately for all of the Taylor and Derek 'shippers out there, the two were able to communicate about the situation and make up in the end. As Taylor and Derek's argument shows, some times you have to make mistakes in a relationship to learn and appreciate your partner even more.

The BiP finale is in two weeks, and it sounds like there's at least one engagement to come out of this season. Now fans will just have to see if there will be another.