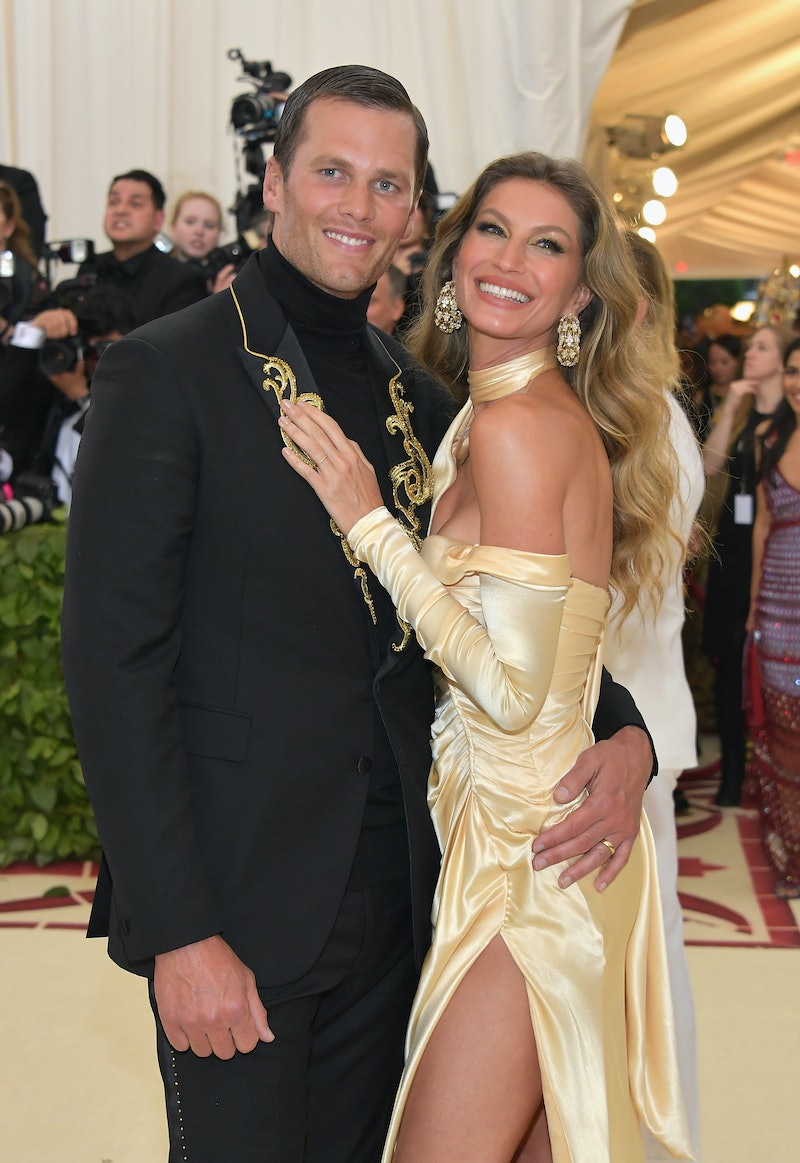 These two make both a powerful celebrity and NFL couple. As famous as their relationship is, you might be wondering about when Tom Brady and Gisele Bündchen first met. They've been together for over a decade, and yes, it was basically love at first sight. From that moment on, they've been head over heels for each other and are also the proud parents to three children Vivian, Benjamin, and Jack, who is Brady's son from a previous relationship with Bridget Moynahan.

According to Us Weekly, the New England Patriots quarterback and Bündchen met through friends in 2006 and then started dating that same December. While chatting with Vanity Fair in 2009, the model opened up about meeting Brady. She said,

"I knew right way — the first time I saw him. We met through a friend. The moment I saw him, he smiled and I was like, 'That is the most beautiful, charismatic smile I've ever seen!' We sat and talked for three hours. I had to go home for Christmas, but I didn’t want to leave. You know that feeling of, like, you can’t get enough? From the first day we met, we’ve never spent one day without speaking to each other."

People confirmed in January 2007 that Brady and Bündchen were dating. Their romance news came on the heels of the athlete's split from longtime girlfriend Moynahan. In February 2007, Moynahan's pregnancy with Brady's child was also announced. In August 2007, the Blue Bloods actor gave birth to their son, John Edward Thomas Moynahan, who they call Jack.

From the beginning it appears she and Brady were committed to co-parenting their son. As for Bündchen, she revealed in her 2018 memoir, Lessons: My Path to a Meaningful Life, "Two months into our relationship, Tom told me that his ex-girlfriend was pregnant." She continued, "The very next day, the news was everywhere and I felt my world had been turned upside down."

That said, Bündchen thinks of Jack as her own and has even referred to him as her "bonus child." She and Moynahan also seem to have a good relationship. The former Victoria's Secret Angel model even said she was "so grateful" for Moynahan in her memoir.

It wasn't until January 2009 that Bündchen and her championship-winning husband got engaged, People reported at the time. They got married one month later on Feb. 26. That said, Bündchen said in her 2009 profile with Vanity Fair that they had been engaged for months. She remained mum on the exact timeline.

As for the wedding, it was a small and private affair. "I don't like parties," she told Vanity Fair. "I prefer something more intimate, just for the closest people."

In November 2009, Brady discussed their wedding with GQ and said they planned their nuptials in about 10 days and it was a super low-key event that consisted of Brady barbecuing "aged New York strips," champagne, cake, and ice cream. "I think you always have this idea that weddings need to be 200 people and you invite everybody, and I'm all for it if people want to do that, but I think there was really something special about just having our parents there," Brady said.

This Feb. 26 marks the couple's 10-year wedding anniversary. They've certainly had quite the romance, and one Brady is extremely thankful for. In a June 2018 sit-down interview with Oprah Winfrey, Brady gushed about Bündchen,

"I just love having to come home to someone that engages me every night. She makes me laugh, oh my God. Just, in some ways we’re different, and in some ways we’re so similar. She flies in the sky, she’s so creative. And I’m very rooted. So she stretches me in ways that without her I couldn’t be stretched."

It certainly sounds like they complement each other beautifully. Clearly, Bündchen's gut feeling about Brady when they first met was right, because look at them now.