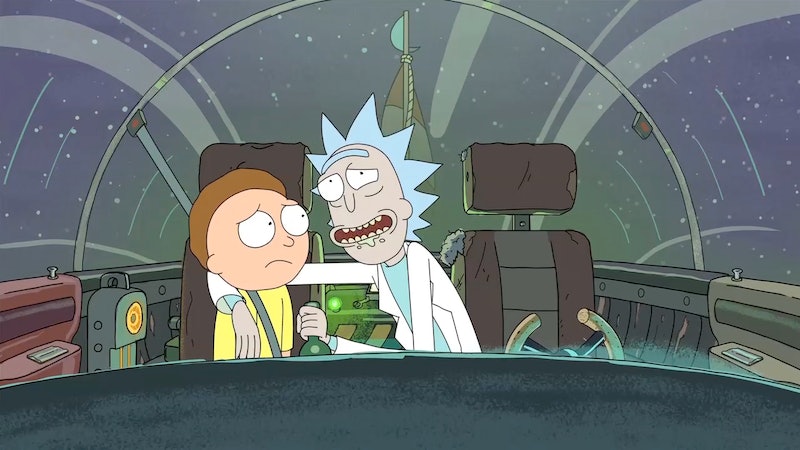 Rick and Morty is sticking around for a long time. On Thursday, series co-creator Justin Roiland revealed on Twitter that Adult Swim ordered 70 more episodes of the hit animated show. So, when will new Rick and Morty episodes premiere? There's no official word yet, and script writer Ryan Ridley told The Detroit Cast in January that the new season might not premiere until 2019. However, viewers can rest assured that the team behind the series — which follows the adventures of a sociopathic scientist and his nervous grandson — is hard at work.

Roiland and co-creator Dan Harmon both posted a video on their Instagram accounts on Thursday announcing that they were heading back to start Season 4. In the clip, Harmon can be seen washing his hair in the shower, when Roiland suddenly stands up in the frame. "Justin Roiland, what are you doing here?" Harmon asks. "I'm always here, Dan, you know that," Roiland responds.

"I gotta get going, Dan," Roiland tells his colleague. "I can't live in your shower anymore like I always do." Harmon asks, "Where are you going, buddy?" to which Roiland responds, "I gotta get back to work, Dan. We both do." He then exits the shower, and Harmon faces the camera and says, "I guess it's time to go."

Rick and Morty wrapped up its third season in October 2017, with a near-two year gap between Seasons 2 and 3, and there has been much speculation regarding the timeline of the show's return.

In an interview with GQ also published on Thursday, Harmon explained that contract negotiations with the network delayed the process somewhat. "It was a lot of back and forth, but Justin and I just needed enough episodes and the right kind of deal structure that would give us permission to do what we want to do, which is truly focus on the show," he told the magazine. "We got all that, and we’re both very excited."

Harmon also responded to persistent questions from fans about why he hadn't been writing the show in the downtime between seasons — with or without a renewal. Now that the show is coming back, he said he has different reasons why he's not writing. He told the publication,

"We need coffee brewed at the office. That’s the new reason. But that’s a reason that can get tackled now, instead of 'I can’t talk to you about it' or 'I don’t know if it’s ever gonna happen' and 'I can’t even think about it or I’ll go insane.' Now the reason can be 'Oh, because it’s Thursday. It’s after 6 p.m.' From now on, the reason that I’m not writing the show will be because I’m done writing it for the day and I’m having fun.

Fans of the show were overjoyed at the news, and voiced their excitement online.

@NTagouri wrote, "70 NEW EPISODES OF @RICKANDMORTY!!!! 70!!!! I AM SO EXCITED!!!!" while @Kuh_Rin said, "Rick and Morty is returning and I might have to risk getting yelled at to wake my boyfriend up just to tell him how excited I am," with a series of smiling emojis.

"There’s few other things that have made me as happy as the news that Rick and Morty got renewed for 70 more episodes."

While fans will have to wait a little longer for an official premiere date for Season 4, Harmon told GQ he's completely committed to the show. "I love everything I make — and hate it, I guess — but I have a very special relationship with Rick and Morty, and getting a 70-episode pickup means that I can actually really focus on it, and loving it won’t be taking away from anything else," he said. "I can let Rick and Morty take away from everything."

And with 70 more episodes on the way, there will be plenty of Rick and Morty to look forward to for quite a while.

More like this
'Ramy' Will “Probably” End With Season 4, According To Ramy Youssef
By Brad Witter
The Industry Creators Have Already Done “A Lot Of Thinking” About Season 3
By Brad Witter
Everything To Know About 'The Last Of Us' TV Adaptation
By Sophie McEvoy and Radhika Menon
This Episode 6 Moment Foreshadows Viserys' Fate On 'House Of The Dragon'
By Grace Wehniainen
Get Even More From Bustle — Sign Up For The Newsletter