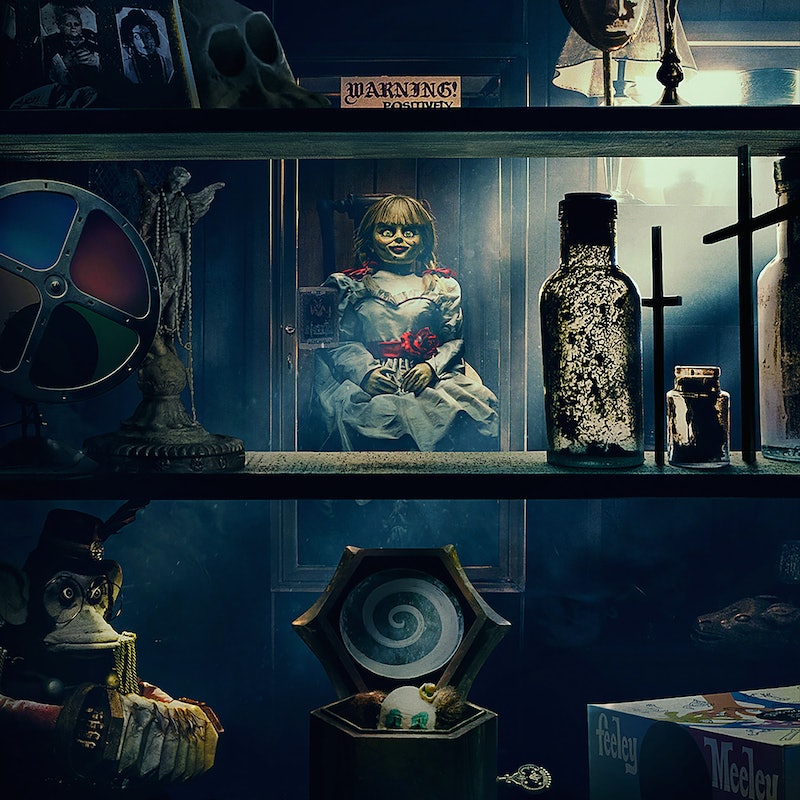 "We wanted it to be close in time to the prologue of The Conjuring where they take the doll," Safran tells reporters on the Burbank, California film set. "We wanted Judy [McKenna Grace] to be still be young Judy [in the] early '70s ... And we wanted it to be pretty close to the time in which they brought the doll home."

Audiences first met paranormal investigators Ed (Patrick Wilson) and Lorraine Warren (Vera Farmiga) in the 2013 film The Conjuring, which was directed by James Wan. The movie was wildly successful, earning over $300 million worldwide, according to Box Office Mojo. A prequel, Annabelle, followed in 2014, and then, in 2016, The Conjuring 2 in 2016, starting what fans now call The Conjuring universe. Annabelle: Creation was released in 2017. In 2018, The Nun followed Valak from The Conjuring 2 and, this year, The Curse of La Llorona will include Father Perez (Tony Amendola) from the Annabelle series.

Safran says that fans can expect to find similar universe connections throughout Annabelle Comes Home — but the movie can also be viewed as a standalone film for those not familiar with the other Conjuring tales. The third Annabelle film will take place over the course of one night and will find the Warren's 10-year-old daughter Judy and her babysitters (Madison Isman and Katie Sarife) being targeted by Annabelle, who they thought was safely locked away in the artifact room.

"We just liked the idea of bringing it closer to home, back to ordinary people and extraordinary circumstances, which was kind of the touchstone for it," Safran says. "And it just really made sense. We always loved the idea of the artifact room being the potential source of more stories."

And the Conjuring universe has more stories to tell. The Conjuring 3 will be released on Sept. 11, 2020 and will center around a murder trial that involves demonic possession, according to Screen Rant.

"The script for The Conjuring 3 is absolutely fantastic, and it is a real departure from Conjuring 1 and Conjuring 2," Safran says. "There are other stories to be told. And each one of them will have its own original feel and some will involve Ed and Lorraine and the Warrens, and some won't. I think that The Nun certainly shows that we can make different kinds of movies that don't involve our principal characters in significant roles, but can really support a great film."

That means there are plenty of more scares to be had in this universe, with or without the Warren family's involvement.

More like this
These 25 International Horror Movies On Netflix Prove Fear Is A Universal Language
By Bustle Editors
26 Ghost Story Podcasts To Get You Ready For Halloween
By Jessica Booth, Mia Mercado, JR Thorpe and Emma Carey
14 Scary Campfire Stories To Tell Your Friends
By Charlotte Ahlin and Kaitlyn Wylde
9 Movies & TV Shows That Prove Stanley Tucci Elevates Everything He’s In
By Jake Viswanath and Radhika Menon
Get Even More From Bustle — Sign Up For The Newsletter