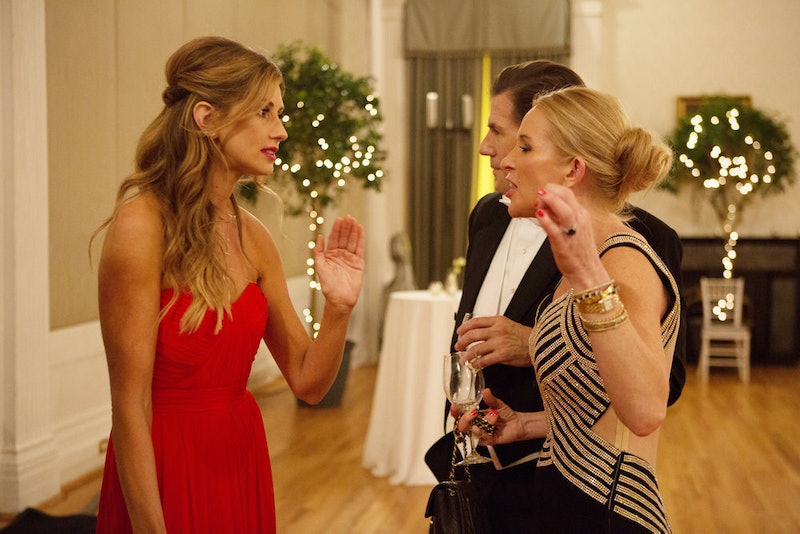 It's the moment every fan has been waiting for (because of the drama, of course): Ashley's return to Southern Charm Season 6. All season long, trailers have been hinting at her explosive reunion with the other cast members, and viewers need to know when it's all going down. So far there have been six Ashley-less episodes in the sixth season, and it seems like there will be a few more before her dramatic arrival.

The official synopsis for the June 26 episode doesn't mention anything about Ashley:

"The boys hit the town in Nashville, in their ongoing attempt to get Austen over Madison. Meanwhile, Patricia hosts a female-only dinner party, which is even raunchier than the boys' night out, as the girls share some secrets of their own, and Kathryn tries to reconcile her friendship with Danni."

Then, the July 3 episode is a behind the scenes episode without content that furthers the story. There's also a Google search results synopsis for the July 10 episode — called "New Craig, Who Dis?" — that doesn't indicate Ashley's return either. (This synopsis wasn't available on any traditional TV listings site or on Bravo's site, so it's unclear where it came from. But it's pretty specific to be inaccurate. Still, take it with a grain of salt.)

"Shep adjusts to life with his new puppy, Little Craig; Chelsea holds Austen's feet to the fire; Kathryn and Naomie get enlightened; when Cameran hosts an oyster roast for her 35th birthday party, she gets 'turnt,' and Craig the human gets livid."

So, it's seeming unlikely that Ashley will be in the next two episodes. After that, though, she could make an appearance. And, per the trailer, she actually makes two appearances. One comes at what seems to be some sort of hunting event and another is at a party with Patricia. According to Entertainment Tonight, the first appearance may come at an event Eliza throws, because she was still in communication with Ashley. "She came to me and said, 'I want a second chance, I want to gain Kathryn’s forgiveness, trust back,' or whatever, 'and I want to apologize,'" Eliza claimed to Entertainment Tonight about Ashley. "So, I’m the vessel of forgiveness. So I tried... it didn’t go as planned."

Patricia told ET that she didn't think the rest of the cast would appreciate Eliza inviting Ashley. "I have a feeling that when she befriends Ashley and brings her to an event ... it's not going to endear her to the rest of the cast," Patricia said.

The second Ashley appearance seemingly comes during the finale party that Patricia throws, where Ashley is desperate to talk to Patricia. In the trailer, Ashley says ominously, "Patricia, the truth will come out." In that instance, she doesn't appear to have been invited, because she's promptly escorted out by security. Even Eliza didn't approve of Ashley's decision to crash, she told ET. "She asked me about it and I said, no! You’re going to make me look like an idiot for welcoming you back into this group," Eliza claimed to ET about Ashley's second attempt to party with the cast. "You're crashing a party I’m going to? That just makes me look worse because I’m the one that has vouched for you."

Ashley may have had some words for Patricia during that party, but the Southern Charm star was unbothered when recounting the event to ET. Patricia said that the evening ended in a way she appreciated — which hints that Ashley may not have felt the same. "So, as we know, I don't put up with any drama or misbehavior if I can help it," Patricia told the outlet. "Let's just say, I am happy with the end result of Ashley Jacobs. I think people that have problems with her, it’s going to be cathartic. The show is going to be cathartic, they're going to like it."

So, it seems Ashley will be in at least two episodes this season, but that may be the last fans see of her. According to Bravo's The Daily Dish, Ashley moved back to California in February. The outlet noted that she posted to Instagram in May to let people know of the life change. "Thanks for the life lessons South Carolina but I’m goin’ back to my roots! #CaliforniaGirl," she captioned the photo. (Her Instagram is now private.)

The Daily Dish also reported that Patricia was asked about Ashley's move on Watch What Happens Live where she kept her response simple. "Here's my feeling to Ashley," Patricia said, waving her hand goodbye. And so closes one of the most dramatic chapters on Southern Charm. Now fans just have to wait to watch it play out in a few episodes.